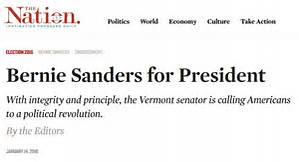 Bernie Sanders jumped 14 points in national pools against Hillary Clinton in just one month. On January 16, it was 59 to 34, Hillary by 25 points. By February 16, this had changed to 53 to 42, Hillary still ahead but by only 11 points, while in the process Clinton lost six points with Bernie gaining 8. Sanders still has a problem with minorities but holds strong on white men, Independents and voters under age 50.

Clinton concerns voters with her ties with Wall Street and for Sanders it is his foreign policy experience. The key factor here is the 14 point advance for Bernie in just 30 days, and these increases have been consistent. With this kind of escalation, and on a regular basis, Bernie could be running very close to his opponent by March's Super Tuesday. But I believe the key states for Sanders will be Michigan, Illinois, Pennsylvania and California.
at February 19, 2016