LATEST: Bernie sanders within one point of Clinton in Nevada Caucus 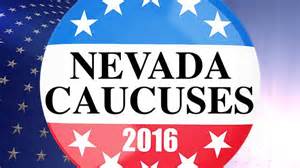 Bernie Sanders has literally destroyed Hillary Clinton's lock on the non-white vote by pulling to within one point of his opponent; Sanders 47%, Clinton 48%. This just three days before Nevada caucuses on Saturday. The new figures were apparently a shock to the Clinton campaign, and yet another sign that Bernie Sanders has grown to the candidate for all the people of the U.S. We're not only talking African-American but the large number of Latinos working in the casinos.

The Bern nas gained 13 points on Clinton since the last poll in October of 2015, a phenomenal jump when considering the odds he is up against. But Nevada isn't really as diverse as many think and less than some of the future primaries, coming in at 15% of caucus-goers, Latino, 15%, African-American, and 3% Asian-American. 65% were white. Nevertheless it is a good test for Bernie Sanders and one that he both relishes and plans to excel in.
at February 17, 2016