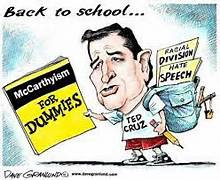 The GOP's leading moron, "Sen. Ted Cruz, R-Texas, said on NBC’s 'Meet the Press' that it is 'not remotely' the Senate’s obligation to consider the Supreme Court nominee that President Barack Obama will choose following the sudden death of Supreme Court Justice Antonin Scalia." Just consider the quoted words, "not remotely" to gauge the level of rebellion by Republicans against anything that President Obama is connected with. Perpetual interruption of government.

Senator Patrick Leahy said in an MSNBC interview with Andrea Mitchell that the Supreme Court has not gone without a seat for a year for as far back as the Civil War. He chastised Mitch McConnell for making a political issue out of the situation, commenting that in his history in Congress, no other Senate leader had done this. In other words, it is another contemptible move by McConnell to block anything the President does.

Leahy also questioned McConnell's remark about letting the people decide the next Supreme Court nominee by citing Obama's 2012 win by 5 million votes, a likely referendum on his potential choice of someone for the high court. the Vermont Senator seemed exasperated with his Republican colleagues to the extent that none of this made sense, which, of course it doesn't. At one point Leahy exclaimed he didn't think even Scalia would approve of these tactics.

One can only hope the Progressives of this country have finally had enough and will change the whole system come November.