Some wingnut math teacher from Ohio by the name of Douglas Frank, with a Texas flag print bow tie, uses the National Anthem to rev up a crowd of double-digit Republicans to listen to his ridiculous, absurd mathematical equation that he claims proves the 2020 election was stolen. Here's the scenario...

"Just about every county in the country was hacked," Frank told the dozens of Texans huddled in a ballroom at a local country club on Sunday. When he finished speaking more than 90 minutes later, they gave him a standing ovation.

The fact that absolutely no evidence of fraud in the 2020 election has been found. and we know of hundreds of attempts by the GOP to find just the least amount of indication there was tampering. Zip...Nada. But does that satisfy these idiots? No, they are hell-bent on coming up with the answer that Donald Trump did in fact win the election. And this mathematical moron is just another example of how this gang of imbeciles is willing to believe anything that will prove that.

And guess who is backing Frank? None other than Mike Lindell, the My Pillow 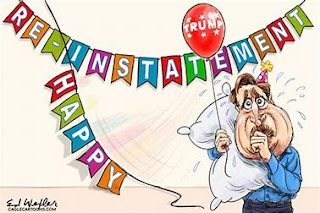 CEO, another crackpot spewing misinformation on the election and Donald Trump. Lindell brags "he has already spent $25 million on his efforts to push election fraud claims." Listen to how Frank justifies his crap reported by CNN...

"In an interview, Frank told CNN that he is an "expert witness" for Lindell's attorney, and he is paid for specific projects. He said groups that invite him to speak cover the cost of his travel and lodging. Others donate money to support his efforts. Still, Frank insisted he wasn't motivated by money or his newfound stardom among election deniers."

"My goal is to be able to pay my bills, and it's working," Frank said. "I've been able to do this a year now and my bank balance isn't getting smaller."

I'll bet it isn't. But apparently Frank's use of the "sixth order polynomial" equation is the key to his claimed success. I looked that up and here is the definition...

The only thing I get from this is the "right hand side is zero," which would be an indication of the Republican lack of credibility in all this bullshit. Okay, how the hell can you people believe this garbage? I know you are from Texas and anyone who would elect Greg Abbott governor is likely to believe just about anything, but come on folks. Here is CNN's take on Frank's math...

"The equation may be better suited to math wonks, but Frank takes liberties in his presentation with snappy lines that succinctly -- and inaccurately -- describe his findings."

Here are some comments from Frank...

"America was stolen by an Excel spreadsheet," he told the crowd at a North Carolina event.

In Idaho, he explained his theory on phantom voters: "They are inflating our registration rolls, stuffing phantom ballots and then cleaning it up afterwards. It's that simple."

He has even absurdly claimed his discoveries could land Trump back in the Oval Office.

You wonder how long America can take this hogwash? Apparently as long as this slice of the obtuse political spectrum is at work spreading this kind of fake news and the bigger slice in this country lets them get away with it. We have let this movement get away from us and we will be sorry if it isn't stopped now.