Donald Trump falsely claimed that Democratic politicians say that "babies can be killed even after birth." This was in Arizona, folks, so anything goes. The double-digit Republicans here will believe anything the former White House maniac says. After all, we have an ex-ice cream salesman for governor and a former Fox News purveyor of misinformation running for governor to replace Ducey.

This is a comment from Trump in Florence, a suburb of Phoenix...

"We're done taking lectures on science from a party that tells us men and women, women are men, and the babies… and this is a fact, the babies can be killed even after birth."

"Trump was likely referring to disproved allegations that then-Governor of Virginia Ralph Northam promoted infanticide in an interview in 2019."

On the outset any person with any brains at all would know not to do this. But apparently Tik Tok does not attract rocket scientists, rather a group of young people who will attempt just about anything suggested by their peers. Here's the scenario...

In one satirical video in which a man claims he's making a cold remedy for his sick wife, he pours bright green decongestant over the chicken and advises letting it sit there for "5 to 30 minutes" as the medicine marinates in the chicken.

"Make sure you're constantly flipping over the chicken. You don't want to give one side more attention than the other," he tells the camera. "Sometimes the steam really makes you sleepy." 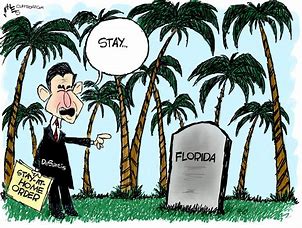 Ron DeSantis Opens Antibody Centers That Are Useless Against Omicron. In case you are not in the loop, Omicron has surpassed Delta in its transmissibility and its coverage, thus, the virus we are fighting now. But, this is something the demented governor of Florida would do for two reasons...

ONE: His top donor invested millions in the COVID-19 antibody treatment the Florida governor is touting. TWO: DeSantis is so stupid he probably doesn't know what an anti-body is anyway.

Here's what the Daily Beast says...

If Florida Gov. Ron DeSantis were a responsible leader dedicated to the well-being of his constituents, he would have made clear that the Regeneron monoclonal antibody being administered at his five new treatment sites is all but useless in the current COVID-19 surge.

But DeSantis is DeSantis, and therefore his own top priority. He is happy to offer false hope in the middle of a pandemic—as his state breaks infection records week after week—if he believes it is to his political advantage.

Ron DeSantis obviously cares absolutely nothing for his Florida constituents since he has blatantly allowed 5,289,959 Covid-19 cases and 63,569, many preventable, deaths with his reckless handling of the pandemic.