Omicron surges in U.S. While So. Africa Passes Peak 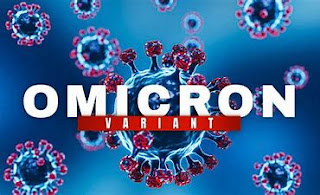 So. Africa was the first to discover the Omicron variant, then it rapidly traversed the world. It was first found in this country in California, in Dec. of 2021, and from there has spread across the nation. We are luckier (over Delta) with this new mutation which has milder effects. But it spreads like wildfire, with a new U.S. daily record set recently of over 580,000 cases in one day with at least 551,000 Omicron. At the end of Dec. 2021, there were 79,161 U.S. hospitalizations, 17,282 in ICU.

Compared to Delta peaking last July/August, with 7,000 hospitalizations then, and patients aged 50 and older who died or were admitted to intensive care “ it generally trended upward in the Delta period," according to the New York Times. Deseret News reports, "The death rate dropped from 29.1% with delta to 2.7% with omicron." I'm perfectly willing to go with the good news, but do you wonder after Delta's ugly impact, is there something we still don't know about Omicron?

“The speed with which the Omicron-driven fourth wave rose, peaked and then declined has been staggering. Peak in four weeks and precipitous decline in another two. This Omicron wave is over in the city of Tshwane. It was a flash flood more than a wave."

Even Abdullah doesn't sound completely sure about the So. African stats, and the virus' "precipitous" decline does sound unreasonable to me, a layperson. But it happened and the studying will go on just like it has since the 1918 flu pandemic, which has produced a vaccine that protects us today. So far the experts still insist a peak to Omicron will occur by January 15, of this year, but Dr. Fauci and other well-known virologists are telling us to continue to maintain Covid protocols.

It has been suggested that statistical data during the holidays could be distorted due to reduced testing so the next two weeks will be crucial in determining the immediate future of the coronavirus. Especially Omicron. Which means there is hope just over the horizon.