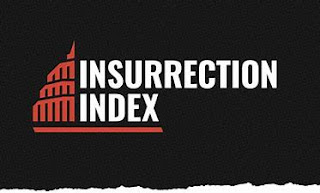 It has been said that Donald Trump sat in the Oval Office watching "with glee" the mayhem going on at the U.S. Capitol. And just yesterday Ohio Rep. Jim Jordan told the Jan. 6, commission that he would not cooperate. Many double-digits across the country agreed with Jordan, but many did not and are giving their testimony. This includes Trump's vice president, Mike Pence. Here is what the Insurrection Index is all about...

There are gobs of information on "elected officials to extremist groups, individuals and organizations mobilized thousands for an egregious attack on democracy." All led by one man, the ex-White House maniac. If you want people, just select "View all profiles." You'll find a host of names including the infamous Wis. Sen. Ron Johnson, who is doubles as an anti-science advocate. Also Ted Cruz, Josh Hawley, Roy Blunt, Rand Paul, Rick Scott, Pete Sessions, Louie Gohnert and more.
WATCH: Capitol insurrection: Tracking the attack 1 year later...

With each picture is the position of the person. It goes on for 20 pages and I am horrified by the number of participants alone. Next is a U.S. state map, listing the numbers of individuals, elected officials, candidates from office and individuals arrested from that state. There are 1,404 records in the database that include people of trust in this country, those that should be protecting our democracy. These number 214 elected officials, 393 organizations and 1,011 individuals.

There is a box where you can search by insurrectionist name, state or affiliation. There is also a place to donate if you want to support this group. My gut tells me this is a work in progress, and one that will be a top priority for Democrats in the 2022 and 2024 elections. In the meantime, NPR is bringing us up to date on the Jan. 6, riot investigation with the reminder...

"It's been one year since a mob of Donald Trump's supporters, armed with everything from pipes and flagpoles to chemical sprays, smashed their way through police lines and into the ornate halls and chambers of the U.S. Capitol.

"The deadly assault on Congress, as lawmakers met to certify Joe Biden's election win, temporarily forced them to scramble for safety and disrupted the peaceful transfer of power."

Christopher Wray, FBI Director, has branded the attack an act of "domestic 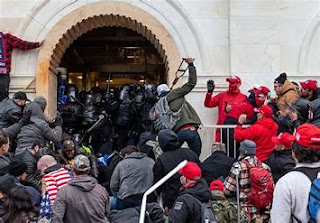 terrorism," initiating "a sprawling federal investigation to track down and bring to account those who took part in the mayhem." Attorney General Merrick Garland says Justice is working hard to "identify, investigate and apprehend defendants from across the country." But based on Garland's handling of the Trump corruption investigation, some think it is not enough.
You'll want to check out the Insurrection Index now to see how many culprits are in your state. And then I suggest regular visits in the future, if you are interested in keeping up with the Jan. 6, investigative committee.
at January 11, 2022