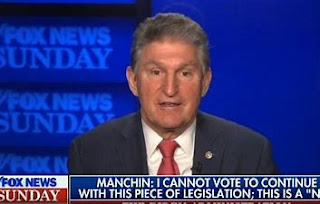 LATEST: Manchin received 36 donations from corporations in the last two months after announcing he would not support Build Back Better, and raised close to $260,000 in that time period.
Joe Manchin, the Senator from West Virginia is all of those and more, looking more like Donald Trump every day. Taking them one by one, LIAR: He told Pres. Biden he would back the Build Back Better bill, then backed out. On Fox News. HYPOCRITE: Acting like a Democrat, voting like a Republican. DESERTER; from the Democratic Party, most of all his constituents at home. CORRUPTER: Shares this with daughter, Heather Bresch.

On Sunday, White House Press Secretary Jen Psaki issued a statement re. Manchin's bail out on the bill designed to benefit Americans in a number of ways, one of the most important decreasing the cost of your medical prescriptions. Of course Manchin would oppose this because of the fiasco with his daughter's pharmaceutical company, Mylan, Inc. which donated at least $200,000 to her father's campaign during five election cycles. Here's the scenario...

"Manchin’s daughter, Heather Bresch, was the president and chief executive officer of Mylan Inc., a pharmaceutical company that specialized in generic drugs. The company raised the price of a two-pack of EpiPen from around $124 dollars in 2009 to $609 in 2016. Bresch left the company in 2020 after Mylan merged with Upjohn, Pfizer’s generic division, in November 2020, to form Viatris Inc. Bresch began working at the company in 1992, and became CEO in 2012."

I did a post back in June asking the question, "Is Joe Manchin a Senate plant 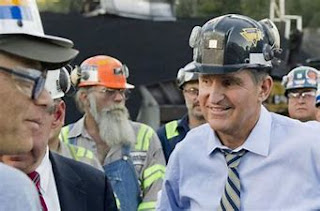 serving Chas. Koch's conservative group?" The answer, an unequivocal YES! The White House is bending over backwards to work with Manchin, a Democrat that should understand the value of Build Back Better to the American public, particularly West Virginia needy. Apparently he doesn't, prompting this from Jen Psaki...

"In the meantime, Senator Manchin will have to explain to those families paying $1,000 a month for insulin why they need to keep paying that, instead of $35 for that vital medicine. He will have to explain to the nearly two million women who would get the affordable day care they need to return to work why he opposes a plan to get them the help they need. Maybe Senator Manchin can explain to the millions of children who have been lifted out of poverty, in part due to the Child Tax Credit, why he wants to end a program that is helping achieve this milestone—we cannot."

The fact is, he doesn't care about his constituents, or he would be supporting BBB. West Virginians are desperately in need of what this bill offers. Let's take a look: $400B Pre-school for all 3 and 4-year olds; $200B Child tax credits; $200B 4 weeks of paid family and medical leave; $165 billion on healthcare spending;  $150 billion to expand affordable home care; $150 billion for affordable housing; $555 billion to fight climate change.

Yes, a lot of money, but is there anything you see in the above that is not justified by the needs in this country? And how is it paid for...

"Democrats say the spending package will be paid for by tax increases on high earners and corporations, but the nonpartisan Congressional Budget Office found on Thursday that this will only raise around $1.5 trillion over 10 years—just short of the $1.75 trillion in 10-year spending.

"The CBO findings are at odds with the White House’s pledge to fully pay for the Build Back Better bill, which is now expected to increase the federal budget deficit by $160 billion over the next 10 years."

Like White House Press Sec. Jen Psaki asks in her statement, how will Joe Manchin explain to his West Virginia constituents that he voted down these benefits: child welfare, medical leave and healthcare spending, affordable home care and housing, and a fight against climate change that could save even more lives. The answer, another resounding YES, Democrats are spending but on the right things that will help homelessness, those in poverty and a general shot to the economy.

Contrary to what Manchin says, some aspects of BBB could counter current inflation as reported by NBC...

"The White House and Democratic leaders have rebranded the legislation as an antidote to widespread price hikes, arguing that it would lower the cost of prescription drugs, childcare and overall expenses related to raising families."

Republicans are harping on increased inflation and consumer prices did jump 6.2% last month. Biden and Chair of the Federal Reserve, Jerome Powell, as well as Treasury Sec. Janet Yellen, are working on the problem. But thanks to the fact that Joe Manchin blew off the Build Back Better bill, Goldman Sachs has issued a gloomy prediction for the economy. Surprise. It always seems to be traced back to the blockhead senator from West Virginia.

And, because of the latter, Manchin has the country on edge, allowing Republicans to plunder our democracy. It is so fragile that this kind of chaos, added to the Covid-19 pandemic, could soon bring on a GOP autocracy, all thanks to Joe Manchin and cohort Krysten Sinema.