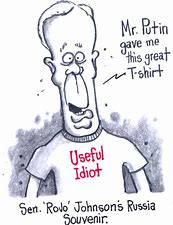 “I’d say that he’s [Sen. Ron Johnson] so misguided that it makes me wonder whether this is all just an act. And if it is an act, what does that say about what he thinks his constituents want to hear?”

“And if this is not an act, then he is just the most ignorant man in the United States Senate. And that says a lot.”
The noxious Republican Senator from Wisconsin is still at it with a new hit for the Covid stage. Ron Johnson says if you gargle with mouthwash every morning, you're safe from the coronavirus. Johnson is a long-term spreader of coronavirus misinformation...

"YouTube this year suspended his account for violating the company’s medical misinformation policies. He has also expressed skepticism about the efficacy of coronavirus vaccine mandates and doses, which have undergone vigorous health testing."

While this wingnut spouted his crap, other anti-vaxxers challenged the credibility of the newly announced Omicron variant back in November of 2021, first noticed in the U.K. They questioned the virus' validity by releasing a bogus schedule of new variant disclosure dates exclaiming the whole pandemic was orchestrated...

"Other false claims about the new variant have leaped across the Internet in the two weeks since it was first identified. One post in a group with more than a million members on the Telegram messaging app claimed the vaccines had caused the omicron variant, according to First Draft, a nonprofit that investigates misinformation. Another conspiracy theory posits that the variant is being pushed by governments and pharmaceutical companies to undermine ivermectin, an anti-parasite drug that vaccine skeptics have said treats covid-19, the disease caused by the virus. (There is no scientific evidence supporting that claim.) 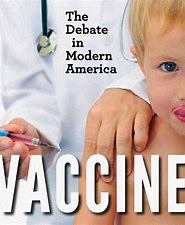 vaccine for their children with one in ten saying. "they will "definitely not" vaccinate their children against Covid-19. This, no doubt accounts for the surge in children's cases across the U.S. The American Academy of Pediatrics (AAP) reports 226,000 child COVID-19 cases from Sep 9 to 16. They represent 25.7% of weekly reported cases.Here's more from the KFF study...

"Vaccine uptake has slowed among adolescents ages 12 to 17 in recent months. Only about half of parents say that their child in this age group has received at least one dose of vaccine, a share that has changed little since the fall, KFF found.

"And among parents of younger children ages 5 to 11, about 29% say that their child has already been vaccinated or will be "right away." But another third of parents of children in this age group say that they want to "wait and see" before vaccinating their child against Covid-19." Finally, Robert F. Kennedy, Jr... how could he have gone so wrong? Along with other politicians and celebrities, this medical lowlife is the worst. Not even going to get into his father, who must be throwing up in his grave. Here's an example of what this moron spews, in this case a far right conference, branded as standing for “health and freedom,” at a Southern California church...

“It is criminal medical malpractice to give a child one of these vaccines,” Kennedy contended, according to a video of the event, one of his many assertions that ignored or went against legal, scientific and public health consensus.

Then, Kennedy hawked his book. If just 300 attendees preordered it on Amazon that night, he told the crowd, it would land on the bestseller list and they could “stick it to Amazon and Jeff Bezos.”

The Agony of Stupidity...39 Million Unvaccinated Idiots on the Street Worse Than 390 million GunsMisinformation was Conceived and Launched by RepublicansAnti-Vaxxers a Steel-Trap of Misinformation