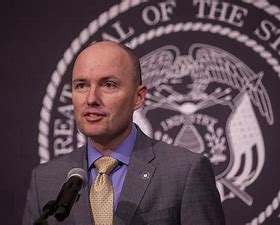 Utah's head of state, Spencer Cox. is a Republican and a Mormon, who has served his time in the missionary trenches of his church. His inauguration, a year ago, just days before the Jan. 6, U.S. Capitol insurrection, was the beginning of a year of massive misinformation on Covid-19, involving mask and vaccine protocols. The results, distrust between Democrats-Republicans as bad as Israelis and Palestinians. But something else was going on that day unnoticed by most...

"It was a Sunday night. A small crowd that included Cox and his wife sat silently in the pews of the St. George Tabernacle. The governor’s voice and the voice of a former federal judge sounded from the speakers, which broadcast a prerecorded conversation between the two men.

"Former federal Judge Thomas Griffith made a chilling assertion: the U.S. Constitution is in grave danger amid the U.S.’s polarized political environment.

“The Constitution is built for vigorous disagreement,” he said. “But it cannot withstand contempt. ... And that’s the problem that has seeped into our system right now. The contempt.”

The key here is judge Griffith's statement, "The Constitution is built for

vigorous disagreement. But it cannot withstand contempt." Here are two definitions of the word, contempt, from Thesaurus.com...

So, in Griffith's view, that's the way the insurrectionist mob felt about American Democracy on that fateful day, bordering on treason at a time when the United States is as fragile as it has been since, perhaps, the Revolution. Taking this another step, this riot group represents the heart of the Republican Party with the ex-president, Donald Trump, orchestrating the whole affair. After January 6, the GOP can no longer deny its leadership in the destruction of U.S. democracy.

And here's the shocker in my opening statement...

Griffith pointed to surveys that have shown “Republicans and Democrats think so ill of each other that they don’t trust each other at all, and the level of distrust is at the same level that Israelis have for Palestinians.”

“The Constitution won’t survive with this level of contempt,” he said. “It has to be addressed and has to be rooted out.”

I guess the next move is, where will the Gaza Strip be drawn, and how long will it take the GOP to start launching rockets?