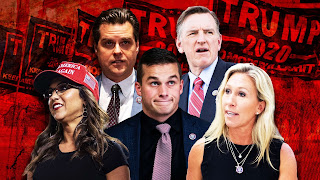 But the bogus Boebert isn't alone; she is backed by Matt Gaetz, M.T. Greene, Madison Cawthorne and most lately, Arizona's Paul Gosar. The Daily Beast calls them, "Stupid Sycophants and Sickos." I see them as the Republican Party's latest descent into an extremism that is threatening to bring this country down. Until now it has been extreme rhetoric. With Boebert's latest diatribe of anti-muslim discourse, she brought out the worst...death threats against a colleague in Congress.

DB continues its characterization of these lunatics...

"Even though their latest publicity and fundraising spectacle is another sad reflection of their party’s dangerous descent into extremism, it nonetheless presents the Democrats with a prime political opportunity to expose the Hate Squad as the modern face and beating heart of the GOP."

There is no doubt this venom emanates from the gang's connection and loyalty to Donald Trump. There is absolutely no inclination in any one of the frightful five to turn their efforts into helping their constituents or doing anything to better the country they represent. As a matter of fact, just the opposite. Paul Gosar "tweeted an anime video showing him killing Rep. Alexandria Ocasio-Cortez and then attacking President Biden with swords."
Watch the perpetual sneer on Boebert's face as she attacks AOC and Pres. Biden...
House Minority Leader Kevin McCarthy thought it was OK, resulting in only two Republicans, Liz Cheney and Adam Kinzinger, voting to censure Gosar for what he had done. With this display of ignorance of what is right, there is no wonder GOP supporters go off on maniacal tangents that lead them to threaten someone's life. At the same time, Donald Trump continues to spread lies and incite violence like he did in the January 6, Capitol insurrection.
And here's what M.T. Greene has been up to...

"Greene was stripped of her committee assignments last year for her utterly outrageous social media posts suggesting that Jews control space lasers that start wildfires, questioning whether the 9/11 attacks were real, suggesting that school shootings were “false flag” operations, and amplifying Q-Anon conspiracy theories. A day after 61 Republican 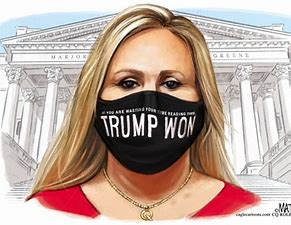 Next is Matt Gaetz...

He is "currently under federal investigation as to whether he paid women, including a minor, for sex. His “wingman” Joel Greenberg, a former Florida official, pleaded guilty earlier this year to sex trafficking and is working with investigators. None of this has inspired fellow Republicans to condemn Gaetz, even as their base increasingly believes the QAnon conspiracy—a domestic terror threat—that liberals are Satan-worshipping child molesters who must be violently removed from office."

"seemingly proposed another “Stop the Steal”-type rally in D.C. this week while sympathizing with the “political hostages” that were arrested and charged for participating in the violent Jan. 6 Capitol riots."

Cawthorne is new to the game of Republican annihilation of our democracy, but, no doubt he will get better at it.

I give thanks to the Daily Beast for the many quotes I have used in this post, and I urge you to read all of the above links. There is so much additional information that I didn't cover, but which is all pertinent to how the Republican Party is attempting to bring down our democracy.