Supreme Court Justice Ruth Bader Ginsburg made the point in the Tuesday, March 27, arguments over President Obama’s Health Care Reform Law.  She drew a parallel between the 1930s Social Security Act in its financing of senior retirement, which uses the input of revenue from donors who will not take advantage of its benefits until a later date, to fund the program.  She said:
"If Congress could see this as a problem when we need to have a group that will subsidize the ones who are going to get the benefits, it seems to me you are saying the only way that could be done is if the government does it itself; it can't involve the private market, it can't involve the private insurers."
Sort of the same conclusion Franklin D. Roosevelt and the Congress came to in 1935 when he signed Social Security into law.  As part of FDR’s “New Deal,” it was designed to help those in need, and to provide against the dangers of modern American life in the future, including old age, poverty and unemployment.  It worked, and those who want to deny the President’s health care reform should ask themselves the question: “Where would we be without it today?”
The two sides are at odds over completely different issues.  On the left, the cry is that there are people out there who need help with their health care and shouldn’t be denied this assistance.  On the right, the complaint is that it takes away the freedom of choice, infringes on their constitutional rights.  The fact of the matter is that at times people do not make the right choice and it is in these kinds of situations that the government must step in to protect the future of the majority.
They did it for the seniors by passing the Medicare law, and now the President is trying to extend health care to the rest of the population.  Some form of universal healthcare must be passed in this country, and soon, or we can expect the health care system to end up in utter chaos, including swamped emergency rooms at hospitals and more bankruptcies from medical bills that can’t be paid.  The feds reported $43 billion in uncompensated cost for the uninsured in 2008.
A CNN/ORC International poll taken recently indicates improvement in the approval rate of the health care law.  On the individual mandate, 47 percent favor and 51 percent are opposed.  The huge difference comes along partisan lines with 71 percent of Democrats in favor and 78 percent of Republicans against.  The Tea Party has been a vociferous foe of the law, and anything else that Obama has proposed, making one wonder over the substance of the opposition.
In a new poll around 60 percent said the healthcare bill would make things better for the uninsured, and 56 percent said it would benefit lower-income families.  However, 44 percent believe the bill would make things worse for the as a whole.  says “The bottom line is that Americans perceive this to be a Medicare-type bill – a welfare bill mainly aimed at helping poor people and those without insurance.”  Duh…isn’t that what caring people do?
James Morone, chair of the political science department at in says, “No one really understands it.  Healthcare is a very high-intensity, low-information issue. People respond to conflict. As conflict escalates, [people] turn against what’s being discussed, they lose confidence in it."  With the obvious conclusion that this “conflict” is coming from right wing conservatives that will do anything in their power to block the President’s legislation (my words). ﻿

In a doctor’s appointment last week, a medical technician told me that Obama’s Health Care Law would cap physicians’ income.  I have researched this pretty thoroughly and find nothing to substantiate the claim but if it is so, the provision should be removed.  And there are other complaints from the docs that are legitimate re. their payments from insurance and Medicare that must be addressed or we stand to lose the basic foundation of our medical care system.
Every time I check my Medicare payments to my doctors, I cringe because they look like something you would expect from a bargain basement sale.  It is very embarrassing but I rarely hear a complaint unless I bring it up, which I do regularly.  Physicians also think their top concerns for cutting costs are not taken into consideration.  They are:
·       Tort reform
·       Streamlining billing
·       Fixing the flawed gov. formula for calculating their reimbursements 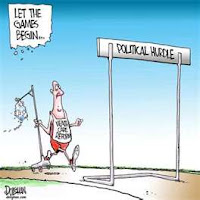 Up to 66 percent of doctors indicate they would consider opting out of all government-run programs.  And the possibility arises that there could even be more reductions in what they are paid from insurance and Medicare.  Priorities in the are completely out of control and this is but one example.  Others include teachers’ and law enforcement and firefighters’ pay to name only a couple.
When you compare this to Peyton Manning’s recent salary with the Denver Broncos of $96 million over 5 years, and the fact that Magic Johnson’s group is paying over $2 billion for the Los Angeles Dodgers—a record for this kind of deal—it becomes abundantly clear that the real significance of basic human needs is not important to some.  There’s also entertainment industry and corporate salaries to name a couple more.
It is not clear from the Supreme Court Justices’ questions just how they will rule on the Health Care Law; the White House is confident but so are the law’s opponents.  What is certain is the fact that the health care system is in trouble and must be fixed.  I personally cannot believe the Court will go against Barack Obama and the Congress in this matter.  If they do, will the right attack Social Security next?
Read more here.
at April 02, 2012