Bullying and a lack of gun control go hand in hand

’s just paid $4.2 million to the family of Sawyer Rosenstein for bullying he experienced with a punch to the stomach while he was in that left him paralyzed from the waist down.  The bully had struck before and was known by the school.  Three months before the incident Rosenstein warned the school he was being bullied, asking for help.  Sawyer is now a freshman at .

Proactive Behavioral-Management exclaims, “If anyone believes that bullying doesn’t take its toll on families, schools, and society take a look at the statistics below:”
·       60% of middle school students say that they have been bullied, while 16% of staff believe that students are bullied.
·       160,000 students stay home from school everyday due to bullying. (NEA)
·       30% of students who reported they had been bullied said they had at times brought weapons to school.
·       A bully is 6 times more likely to be incarcerated by the age of 24.
·       A bully is 5 times more likely to have a serious criminal record when he grows up.
·       2/3 of students who are targets become bullies.
·       20% of all children say they have been bullied.
·       20% of high school students say they have seriously considered suicide with the last 12 months.
·       25% of students say that teachers intervened in bullying incidents while 71% of teachers say they intervened.
·       The average child has watched 8,000 televised murders and 100,000 acts of violence before finishing elementary school.
·       In schools where there are bullying programs bullying is reduced by 50%.

And here’s another fact that should make the public take another look at the National Rifle Assn.’s crusade to loosen or eliminate gun laws.  “Bullying was a factor in 2/3 of the 37 school shootings reviewed by the Secret Service.”  Fortunately, ’s latest stupid gun law to allow guns in colleges was vetoed by the Governor.  Add to that a loss of employment amounting to $19 billion and a drop in productivity of $3 billion due to workplace bullying.


According to the Bully Free Program, “Bullying is a form of aggressive behavior that is intentional, hurtful, (physical and psychological), and/or threatening and persistent (repeated). There is an imbalance of strength (power and dominance).”  Further, the mistreatment must be intentional, hurtful (physical or psychological), threatening, fear of harm and safety, and occur more than once, although some think once is enough.

There is both physical and verbal bullying and the above site, which I urge you to see if you have a problem or are just interested, explains what each is about.  It shows the social/relational downside that can humiliate, embarrass and destroy reputations.  Boys and girls are both bullies and there is cyber bullying which I will cover at more length later.  Every 7 minutes an elementary child is bullied on the playground but the onset is actually between 3 and 4 years of age.

It is a common theme in school shootings as students retaliate for the bullying; roughly two-thirds of school shooters “felt persecuted, bullied, threatened, attacked, or injured by others.

Thirty percent of all child suicides can be directly related to bullying, some of which use a gun.  As an example, the worst school shooting ever at Virginia Tech in 2007 resulted in part by bullying of the shooter, Cho Seung-Hui, according to students who knew him.

The Bully Free Program study covers the typical characteristics of the bullied as well as warning signs that your child might bully someone.  Folks, these are startling facts.

And here’s the most onerous fact of all: “Twenty-five percent of teachers see nothing wrong with bullying or put-downs and consequently intervene in only 4 percent of bullying incidents.”

And then there is cyberbullying, which is deliberately using digital media to communicate false, embarrassing, or hostile information about or to another person, according to the Breaking Free Blog.  Luke Gilkerson provides facts and statistics that cover everything from types of online bullying to the warning signs of being bullied.

Suicides from cyberbullying are prevalent and Gilkerson lists several to make his point including Tyler Clementi in 2010, Alexis Skye Pilkington in 2010, Phoebe Prince in 2010 and Amanda Cummings in 2011.  Tragedies that did not have to happen. 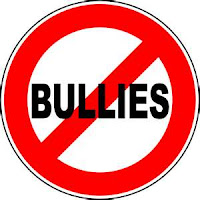 So what have we learned so far?  One disturbing fact is that loose guns contribute to the bullying problem in both victims’ retaliation and from those who commit suicide.  It seems that guns play a part of most everything that is bad and contribute little to the protection of those who carry them.  Also, schools do not understand nor do they take this issue seriously enough.  Parents are aware but need to counsel their children more.  It is a problem that will not go away.
at April 30, 2012