Has the NRA provided a ‘license to murder’ in “stand your ground law?”

New York Mayor Michael Bloomberg thinks so, claiming the National Rifle Assn. (NRA) promotes a gun culture at the expense of public safety in its creation of and promotion of the “stand your ground” laws.  This legislation that allows gun owners to claim self defense in shooting someone, even killing them, if they feel threatened, has been passed or is under consideration in 35 states.  , where it originally passed in 2005, is where Trayvon Martin was killed.
Bloomberg claims it advocates vigilantism saying, “You just cannot have a civilized society where everybody can have a gun and make their own decisions as to whether someone is threatening or not."  Further, "This has nothing to do with gun owners' rights, nothing to do with the second amendment. Plain and simple, this is just trying to give people a license to murder."  The twisted minds of the NRA and some of its members will no doubt try to refute all of this.
And this fanaticism is not limited to the gun worshippers.  Immediately following the Trayvon Martin shooting, senators introduced NRA-backed legislation that would require all states to honor any permit for the concealed carry of weapons that has been issued by any other state.  Considering the fact that just about anyone in the state of Arizona can buy a gun and carry it anywhere they choose, you could be putting gun freaks on the street throughout the country.
It is almost as if the NRA looks at a tragedy like Trayvon Martin’s killing and suddenly realizes the promotability of the incident to assure its dues-paying membership that, no matter how horrific a situation is we can overcome the negativity by passing another law to loosen gun control.  And then they promptly take it to the gun nuts in Congress who are afraid to oppose the NRA.  Pathetic!
﻿


If you are a Bill Cosby fan, or even if you aren't, this is a must-see video on his view of gun control below:

And something that could become a national public safety issue is the confusion that has been planted in the minds of police officers of whether or not to bring charges against someone like a George Zimmerman for killing Trayvon Martin in supposed self defense.  The police did not, yet a special prosecutor brought 2nd degree murder charges against Zimmerman.  This kind of mentality could potentially release a maniac to do even more killing.
According to a Reuters/Ipsos poll, “Most Americans support the right to use deadly force to protect themselves -- even in public places -- and have a favorable view of the National Rifle Association…”  OK, I can live with number one, confined to the home, but two and three completely baffle me considering the evidence of so many guns on the street and the shootings that take place daily.  There were 48 deaths from shootings alone in just last March.
The poll concluded that "Americans do hold to this idea that people should be allowed to defend themselves and using deadly force is fine, in those circumstances," said pollster Chris Jackson. "In the theoretical ... there's a certain tolerance of vigilantism."  But did the poll mention to its respondents that many of these cowboys have absolutely no training in the use of firearms, like in where it isn’t required.  Ladd Everitt of the Coalition to stop Gun Violence.
I asked him the amount of training the average gun owner was required to have?  His reply:
“If they're simply purchasing firearms, none whatsoever.  If they are  going to be carrying that gun in public, they MIGHT be required to have training.  In 28 states you can now openly carry a loaded gun in public with no permitting, screening or training.  Four states now require no permitting, screening or training to carry a concealed firearm in public.  And even in "Shall Issue" states that require one to obtain a permit to carry a concealed firearm in public, several have no training requirement.” 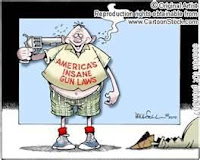 “According to the Brady Campaign to Prevent Gun Violence, nearly 100,000 people are shot every year in the in murders, suicides, accidents or police intervention.”  A whopping 91 percent want every gun owner to have a background check, including those in the gun show loophole, a move that the NRA and its members will probably fight to the death.  A measly 6 percent were in favor of no or minimum restrictions.
There is so much mixed reaction in this poll that I recommend that some independent pollster conduct a current study to determine just how often a gun-carrier has been successful in stopping an individual confrontation or has been instrumental in assisting someone in need.  The NRA crusades for guns for everyone everywhere in the name of protection and self defense.  It is time that we know just how effective this is, particularly re. carrying of concealed weapons.
at April 19, 2012