It is a well known fact that many gun owners have little or no weapons training because a number of states do not require it.
﻿
﻿

“In 28 states you can now openly carry a loaded gun in public with no permitting, screening or training.  Four states now require no permitting, screening or training to carry a concealed firearm in public.  And even in "Shall Issue" states that require one to obtain a permit to carry a concealed firearm in public, several have no training requirement.”
The above statement came from Ladd Everitt, who should know.  He compiles this data for the Coalition to Stop Gun Violence in his role as their Director of Communications.  He used as a prime example exclaiming, “Law enforcement {in } would have no idea what the background of a gun carrier is until he opens fire (unless that individual voluntarily obtained a permit to carry a firearm into certain sensitive public spaces.”
One of the primary reasons used by the National Rifle Assn. (NRA) and its members for carrying their guns anywhere they choose is for self-protection or to help out a fellow citizen.  Second, they think the 2nd Amend. gives them this right.  First of all, I don’t want the help of some yahoo playing Wyatt Earp because there is a good chance he or she might shoot me, not my aggressor.  Next, the 2nd Amend. does not cover the carrying of concealed weapons.
But the real danger of these gun worshipping cowboys on the loose is found in the statements from and training of law enforcement officers.  In an article, “Police know better than to stand their ground,” in The Daily Beast, the irony is drawn: “while police departments now encourage off-duty police officers to avoid carrying firearms or confrontations, the so-called stand-your-ground laws effectively encourage civilians to do so.”
﻿
﻿

Law enforcement has come out in force and almost 100 percent unanimous against gun laws like “stand your ground.”  But lawmakers never listen because they are playing to a constituency that loves its guns, and apparently hasn’t the slightest notion of what damage these firearms can do in the hands of the bad guys and the inexperienced.  Law enforcement even admits that law officers off-duty can misread a tense situation.
As an example of the difference in outcomes of a police force still allowing their officers to carry their weapons off-duty, The Baltimore Police Department last year had “three highly questionable shootings by officers in bars.”  By contrast both and have the policy for not carrying when not working and off-duty shootings are rare among their combined 45,000 cops.  Police departments suggest they simply walk away from most altercations.

The Daily Beast says, “With police officers being warned away from involvement in all but the most unavoidable life-and-death confrontations, the last thing the nation needs is their replacement by unaccountable, self-deputized citizen surrogates.”  It becomes even more important when you take into consideration that minorities have been the targets of these so-called “watchmen.” 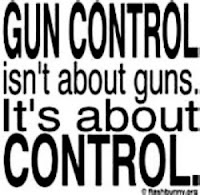 Further, “In the Martin case, the evidence so far suggests that Zimmerman had convinced himself that the teenager was one of the dangerous “assholes who always get away,” as he put it to the 911 dispatcher (who encouraged him to remain in his vehicle and let the police investigate).”  George Zimmerman did not comply and this led to his shooting and killing of Trayvon Martin.
Also from The Daily Beast, “The ‘nation under siege’ rhetoric favored by advocates of widespread weapon carrying resonates with the worst possible self-appointed “community defenders”: the mentally unstable and those deeply rattled by ’s cultural and demographic changes.”  One needs to add here, all the “rhetoric” suggested above spews from the muzzle of the NRA.  Pathetic!
And if you didn’t catch the moral of this story, it is that even with the training that is available to private gun owners, and meager it is at times, you could never achieve the preparedness that law enforcement officers have.
at April 13, 2012