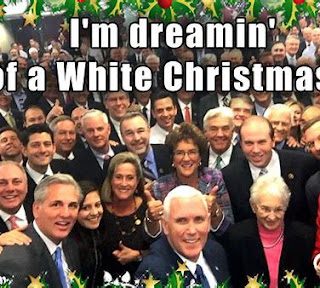 Take a good look at the picture to the left. See anything missing? The Republicans' idea of a "white" Christmas is literally white. Here is a post from AlterNet: "The Republican Party is soaked in white supremacy. But is it a hate group?"  To begin with, here are some things to think about...

Each, GUNS, ABORTION and IMMIGRATION, has its explanation from John Stoehr of the AlterNet and I urge you to read his post, here. All three of these issues have one common denominator, fear. But does all this make them Republican hate groups? Southern Poverty Law Center’s Rachel Carroll Rivas asked, 'What’s the status of hate groups in America?' I have followed SPLC for years and find their research on hate groups the best.

Some of Rivas' comments...

"after the insurrection on January 6, 2021, the hard-right movement converged around a willingness to engage in political violence, inflict harm and deny legally-established rights.

"Honestly, these harmful ideas have become so commonplace 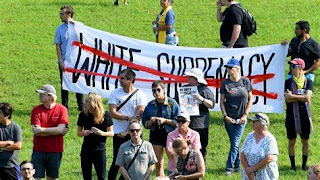 that card-carrying membership is less and less necessary.

"We consider the hard right of today inherently anti-democratic.

With that said, many of the members of SPLC's hate groups are connected to Donald Trump, and Christian Picciolini who nearly 25 years ago was a leader in the skinhead movement defines who make up hate groups...

"It's the average American. It is our mechanics, it's our dentists, it's our teachers, lawyers, doctors, nurses and unfortunately that's the way it's turned into the last 30 years." 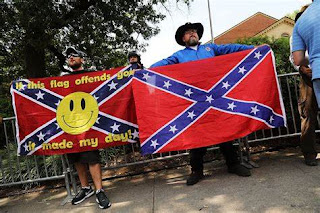 Although not mentioned by name, there are member of the U.S. Congress who do support extremist groups...

"a small but vocal band of Republicans now serving in the House provided legitimacy and publicity to extremist groups and movements as they built toward their role in supporting Mr. Trump’s efforts to subvert the outcome of the 2020 election and the attack on Congress."

So, it suddenly becomes clear why Republicans are dreaming of a White Christmas. Their dream is indisputedly focused on the word "white."