Pets should not be given as presents 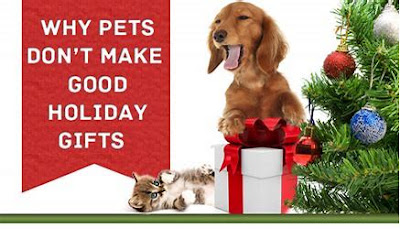 The Jacksonville, Arkansas animal shelter says it right: "Getting a dog is a lifetime commitment, not a Christmas gift." But hundreds of animals will be given this year at Christmas and hundreds will end up in shelters in 2023. Here are some numbers from PETA...
Here's the scenario from Jamie Parker, supervisor of Jacksonville Animal Shelter...

"Some of them get adopted and they stay. But a lot of them end up coming back to us, and a lot of them find themselves back in the kennel with no one that can play with them all day."

PETA says you should never give animals as Christmas gifts. It does sound like a 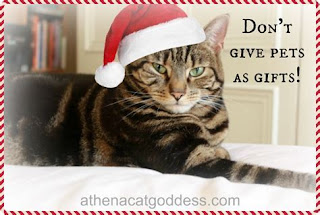 good idea and the expectation of those faces when they receive their new pet makes the giver think they have done something great. Apparently they haven't...

"By January, many of those “present” animals will have joined the more than 6 million who enter shelters in the U.S. every year. Some animal shelters even get in on the craze, offering discounted or free adoptions and encouraging people to give animals away as gifts. Their intentions may be good, but they likely don’t realize that they’re exacerbating the homeless-animal crisis."

Other reasons not to do this include the fact the holidays are full of a lot of people having fun; a great deal of frivolity in the household; noise and commotion a new animal doesn't understand and most likely will be frightened of. The house is filled with strangers coming and going. But the worst thing are the things left around from gifts like ribbons, ornaments, electrical cords, and sweets as well as other foods and drinks.

"When shelters offer animals up for a pittance (or for free), they devalue them and encourage impulse adoptions by eager people who haven’t considered whether they or their gift recipients are ready to invest the substantial amount of money, commitment, and care that the animals will need. And animals can be acquired as cheap gifts by people who can’t afford to care for them. After the holidays, many of these “present” animals end up back at the shelter or, worse, sentenced to a life of isolation on a chain or in an outdoor pen or dumped on the street."

I, nor PETA, nor all the animal shelters and rescues nationwide don't want to discourage the public from adopting pets, at Christmas or the rest of the year. But you must want that animal to become a member of your family and realize the responsibility of caring for them. It's not easy but oh so rewarding. I know, my wife and I have taken in eleven rescues and we've had the time of our lives. Merry Christmas to you and your pets and to the rescue animals all over the world.