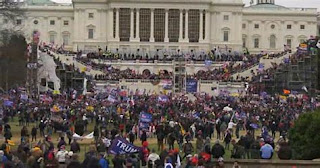 Posted yesterday my wife and I watched the Monday hearing of the Jan. 6 Commission and came to the conclusion the panel nailed Donald Trump. Following are some of the leading quotes from the meeting, compliments CNN...

1. “The Trump campaign legal team knew there was no legitimate argument…to overturn the election, and yet President Trump went forward with his plan for January 6 anyway.” – Wyoming GOP Rep. Liz Cheney

2. “Mr. Trump decided before the election…that he would claim it was rigged.” – California Democratic Rep. Zoe Lofgren

5. “My recommendation was to say that ‘Votes were still being counted. It’s too early to tell, too early to call the race but we’re proud of the race we ran, and we think we’re in good position.’” – former Trump campaign manager Bill Stepien

These are the first five and I urge you to go to the CNN article for the rest as well as more in-depth explanation.