The love of animals... 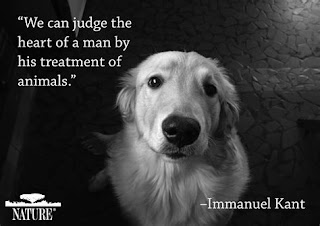 Immanuel Kant feels that people can be judged by the way they treat animals. I worked for a guy once who was a complete jerk, but one day I learned how much he loved his cat, often discussing with me his care of the animal because he knew we had cats. After this I realized I couldn't fault the man altogether and our relationship improved measurably. But treatment of animals by some results in abuse, even cruelty, an area requiring new laws.

But have you ever taken the time to see that lovin' look in your pet's eyes that says they adore you. And, of course, you adore them too. The connection to our animals has grown over the years to where they are now one of the family. And that's the way it should be as most of us consider them our children, most especially when you don't have human kids. These households treasure their pets and some families spend large sums on their animal for toys and miscellaneous things.

The main thing is you must keep them healthy making regular trips to the vet. Find a caring doctor for your species, dog, cat, horse, etc. Depending where you live, housing is important. As an example, you should never leave a cat outside for the simple reason they are easy prey for predators. Dogs are better able to defend themselves but should be in a fenced yard high enough to keep out all other animals. Climate change has made some desperate and they are on the prowl.

Animal lover and vet, James Herriot, draws a comparison between animals and 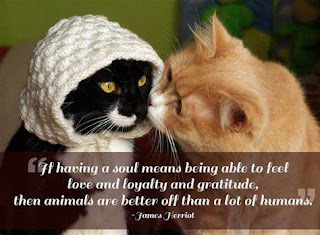 humans, contrasting the souls of each, and animals come out on top. The traits Herriot emphasizes are love, loyalty and gratitude, three qualities that many humans are sorely missing. There is a saying that I use regularly in my blog: "All I Want is to Live." Animals don't ask for much but the least we can give them is a loving family and a forever home.

Just think about these stats from the ASPCA...

Why not go to your local animal rescue, shelter or humane society today and take one, or more of those statistics with you to your forever home.