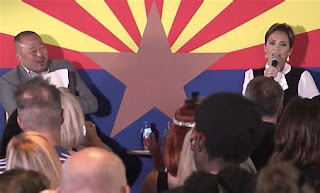 As I said in my blog post yesterday, "Kari Lake, Potentially Most Dangerous Politician in America," this country has a desperate problem on its hands if this lunatic is elected to any government office. Republicans are having a field day with the Paul Pelosi assault, with Elon Musk doing his own muckraking, and Lake is licking her conspiracy theory chops as usual. She expects to win the Arizona governor's office Nov. 8, with her special brand of misinformation.

The Republican disinformation machine is never silent, it purrs right along and has picked up significant speed before the elections. Paul Pelosi, the husband of Nancy Pelosi, Democrat Speaker of the House, is the perfect target. Beyond tasteless, Lake is not alone, Yahoo!News reports, "Prominent Republicans push conspiracy theories about attack on Nancy Pelosi's husband." Some of those mentioned are Rep. Clay Higgins, R-La. and Virginia Gov. Republican Glenn Youngkin.

There are more, and of course...

Donald Trump Jr., meanwhile, shared an Instagram post on Sunday night featuring a photograph of a hammer on top of a pair of Hanes underwear that he captioned, “Got my Paul Pelosi Halloween costume ready.” Trump Jr. doubled down on Monday, reposting the meme and adding the comment, “The internet remains undefeated… Also if you switch out the hammer for a red feather boa you could be Hunter Biden in an instant.” He also shared on Instagram a meme that showed two men having sex and the older one on the phone telling police he’s being attacked.

We expect this kind of nonsensical nonsense from the Trump family but not from elected officials the American public should be able to expect civility from. But, there is no civility left in the Republican Party and that, folks, is the problem. Nancy Pelosi was in Washington, "but Paul Pelosi, 82, suffered a fractured skull and underwent surgery at a local hospital. He is expected to make a full recovery." Yet the GOP has chosen to do their smearing at the bottom of the barrel on this.

Here is Elon Musk's statement with added comment from Yahoo...

“There is a tiny possibility there might be more to this story than meets the eye,” Musk tweeted, along with a link to an account of the attack in the Santa Monica Observer, a site with a history of posting right-wing misinformation.

Musk subsequently deleted the tweet, but he did not post any admission that it was false or apologize for defaming Pelosi. Instead he mocked the New York Times for accurately reporting what he had done.

Saying he is not attached to either political party, he sure sounds like a Republican 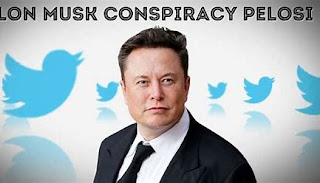 Heading back to Arizona, another political freak...

Wendy Rogers, a Republican state senator in Arizona, shared a phony Amazon listing for a “Paul Pelosi Fake Attack Plastic Novelty Item” that included a blood-stained hammer. Anthony Sabatini, a Republican state legislator in Florida, posted “RELEASE THE PELOSI TAPES” on Twitter. (It’s not clear what tapes he is referring to.)

But here is the ultimate of bad taste...

"Last Wednesday, Rep. Tom Emmer, R-Minn., posted on Twitter a video of himself firing a rifle and the hashtag #FirePelosi. In an interview with CBS on Sunday, Emmer was asked if he would take down the tweet and if he would stop running ads focused on Pelosi. He declined to do either."

With gun violence raging in America, this moron uses a gun to mock Nancy Pelosi. If the American public doesn't realize the dilemma we are in and correct it in the upcoming election, the U.S. is destined for disaster. VOTE DEMOCRAT NOV. 8!