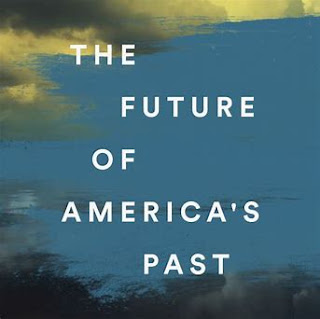 Some of the most undone work is the Arizona governor's race between Democrat Katie Hobbs and Republican Kari Lake. Hobbs leads the Trump lunatic Lake by only one point and Arizona is taking forever for the final vote count. This race has national ramifications in that a Lake win could boost her into the national picture. Rather than document the insanity of her campaign, you can see a compilation of my posts here. It is astonishing to me Lake has gotten this far.Now, back to the national scene with a tug of war between Donald Trump and Florida governor Ron DeSantis for 2024. The Daily Beast says, "Trump Would Easily Crush DeSantis in Battle Today." That's today but in two years this country could be in a new civil war if the hate-mongers don't back off their rhetoric.
Majority Of Trump Voters Say Civil War ‘Likely’ In Next Decade...
I recently finished The Next Civil War by Stephen Marche and it is frightening. One of the author's findings describes how the next one won't be fought on the battlefield, rather it will be neighbor against neighbor, depending on your political stand. Just think of the consequences especially if you live in a radically right area and you are on the liberal left. I urge you to read my post and if you really want a scare, read Marche's The Next Civil War.
And right in the middle of all this altercation is a war between Donald Trump and 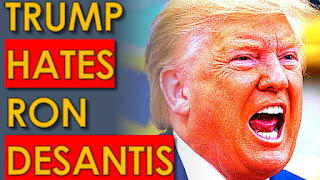 Ron DeSantis that might just surpass 'winner takes all' to a conclusion of 'self annihilation.' It is an unfortunate fact but with the current situation in America this may be the happy ending. If this could take down the Republican Party to a point where they have to negotiate, we have saved our democracy. A recent Mother Jones headline: "The Party of Don’t Say 'Democracy'” says it all...

"Rep. Lauren Boebert (R-Colo.) sent out a campaign with a solemn, all-caps heading: PARTICIPATING IN OUR CONSTITUTIONAL REPUBLIC.

"As I read the email, I noticed that Boebert’s campaign uses a lot of words here to describe our form of government. It’s a “constitutional process.” It’s “representative.” But one word is glaringly absent: “democracy.” 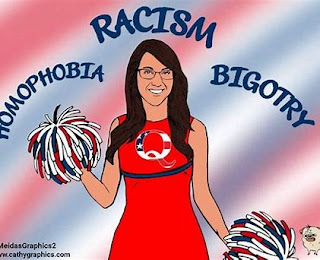 Of course, Lauren Boebert is an idiot but her words reflect the position of the Republican Party. There's more...

Indeed, Republicans across the country are removing the word “democracy” from their lexicon. My colleague Pema Levy reported today that in Arizona, Senate candidate Blake Masters argued that the United States is not a democracy but a republic. “It sounds like a nerdy takedown,” she writes, “but it’s being bandied with frequency by Republicans who also support minority rule and supported overturning President Biden’s 2020 victory.”

Robert Reich says, and I agree, Democrats Can No Longer Compromise with “Authoritarian” Republicans. Republicans no longer understand or condone the word "compromise." From the right, no one since Everett Dirksen, U.S. Senator from Illinois, has mastered his ability to negotiate and compromise for the good of the U.S. Reich says...

President Biden must “push back as hard as he can” if Republicans take control of even one chamber in Congress following Tuesday’s midterm elections. He says the administration needs to be clear there is no compromise on the debt ceiling, which he expects a Republican-controlled Congress would challenge, potentially triggering a repeat of the political crisis in 2011 under former President Obama.

Well, the Democrats still hold the Senate and that position could strengthen if Warnock wins in Georgia. The House is still up for grabs but, at best, Republicans will end up with a small majority. The focus is then on 2023, then 2024 with plenty of time for the left to build momentum.