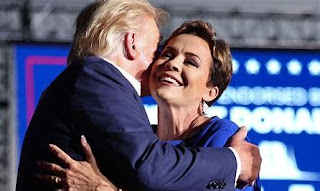 Republican Kari Lake is running for Arizona governor against Democrat Katie Hobbs with the results as of this writing Hobbs 50.33 to Lake 49.67. There are over 600,000 votes yet to be counted with the state being compared to Florida which had their votes counted just hours after the polls closed. If Kari Lake should win, she carries the baggage of being a Donald Trump minion and 2020 election denier. Morning Joe says Lake is, "Willing to do or say anything."...

"MSNBC's Joe Scarborough singled out one of Donald Trump's hand-picked candidates as a threat to U.S. democracy." 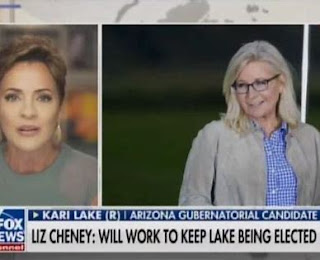 stabbed while he was speaking to a crowd of people not all that long ago. Then blamed the "left" in the spread of her lie. And then there is my post, 'Kari Lake knows that the MAGA mob must stay ignorant in order for Trumpism to work. She wants less math, science, and history in public high schools.' But the clincher is my Sept. 2022 post, 'Kari Lake Invites Jesus Christ to Arizona." You have to read it.

Speaking on MSNBC, Fanone (Capitol cop who was injured) referred to Lake, who is the Republican nominee in the 2022 Arizona gubernatorial election, as a “piece of sh*t".

To read all my posts on Kari Lake, go here.

Maricopa voting officials announced earlier today that they would be counting votes into early next week. Meanwhile, voters will be counting the hours until Katie Hobbs is pronounced Governor of the state of Arizona.

NEXT: The mayhem of Florida's dictator, Ron DeSantis