Do We Really Need Progressives? 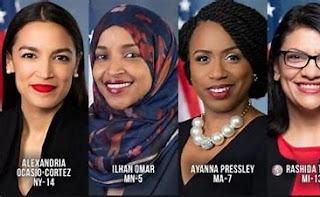 Six House Democrats known as The "Squad" almost doomed Pres. Joe Biden's $1.2 Trillion Infrastructure bill. They are progressives and, although there is a lot of merit in what progressives stand for, their desires in this case do not justify going against the Democratic Party to condemn its agenda. If it hadn't been for thirteen Republicans voting for the bill, it might not have passed. Here's the current Squad... The Squad demanded the Build Back Better Act, sister legislation to the 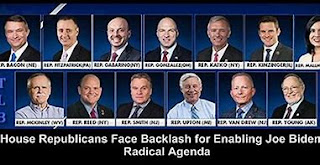 Infrastructure Bill, be passed simultaneously. It wasn't up for passage so the gang of defectors balked at giving Joe Biden the big win he needed, but got anyway, no thanks to the faithless six. I was a progressive, supported and voted for Bernie Sanders, and I am very disappointed at his opposition to this bill. There are three years left in Biden's administration, with the hope of some miracles in 2022.
But maybe the Squad, and Bernie Sanders, consider 2022 a lost cause, possibly even 2024, and they are going for broke with the hopes of getting as much done as possible. That makes little sense as well since Biden could have gotten nothing had it not been for the Republican crossovers and everyone, including progressives, lose. We mustn't totally discourage this faction, however, since their fight is for the forgotten group that Democrats used to stand for. 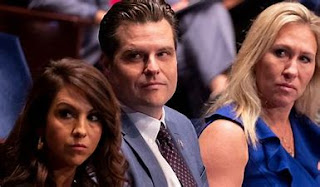 The 13 Republicans who supported Biden's Infrastructure Bill, of course, had to take flak from especially the Terrible Trifecta, consisting of Lauren Boebert, Matt Gaetz and Margorie Taylor Greene. These are the original three Republican airheads that have proven just how far off course the right has gone. And this kind of stupidity in the American Congress is why the left must solidify its support and move forward in order to save our country from anti-democracy.
So, do we really need progressives? Perhaps the word "progressive" has overpowered this group and others like them, resulting in action almost like another political party. What the Dems need is for this bloc to merge with moderates and conservative Democrats, but, at the same time, when they push their agenda, there is a need for solidarity. Those conservative Dem could take this advice as well.
at November 10, 2021