Animals have feelings and if you don't believe it look at his dog who was abandoned in an old partment building, sad, crying alot until it met the rescuer...

He was devoted to his owner, where the dog, AJ, thought he had a forever home. He didn't. All of a sudden, he finds himself in a strange place surrounded by people he doesn't know, so what does AJ do? He cries. Yes, he is heartbroken that he was just left as yesterday's trash. The suddenness of it all places this beautiful animal in a position of refusing to socialize and to eat. Think, folks, if you have this in mind or anything like it. 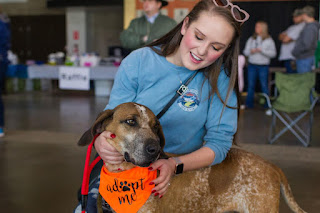 Some 6.5 million animals enter shelters each year, but there are a total of 70 stray animals making it obvious there is much to be done in finding them forever homes. It was worse ten years ago when the shelters took in 7.2 million animals. It has been challenging recently as animals were adopted for companionship during the pandemic, then returned to the shelter buy things have gotten better.
Shelters across America, and the world, need help. If you think you might want an animal to care for and liven up your household, talk to someone at your local shelter. Take a look around, and if you don't fall in love during your time there, maybe it's not your time yet. Think about it and give these guys and gals another shot later. Whatever you do, you must be sure when you do adopt. If this isn't a move where your new animal is a part of the family, then it's the wrong move.
Good Luck!
at November 03, 2021