Racism is worse than that old weather saying. People have been talking about it for years, but no one has seriously done anything about it...

My take is that it is definitely a dirty word, even many racists would agree with that, but it is like one of those rogue genes that are the basis for a particular kind of behavior which allows those who have it to justify what they do. I grew up in the South, fighting with racists all my life, even within my own family, and when I finally left in the 1960s, there were still lynchings of black people, their houses being burned to the ground, all orchestrated by the Ku Klux Klan.

Like the Mafia, the Klan slowly faded away, but as is the case for both, there is still evidence of their activity around. Here's a scenario from NPR... 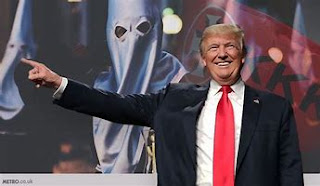 NPR adds, "The watchdog group blames President Trump, his administration, right-wing media outlets and the ease of spreading hate on social media platforms for the alarming increase." Trump has promoted and encouraged white nationalism since being inaugurated, hiring people like Steve Bannon and Stephen Miller, of which the latter is still on his staff. Heidi Beirich, director of the SPLC's Intelligence Project said...


"The numbers tell a striking story — that this president is not simply a polarizing figure but a radicalizing one."

Excellent video on the Trump-Miller relationship...


"Heidi Beirich, director of the SPLC's Intelligence Project, said in a statement. "Rather than trying to tamp down hate, as presidents of both parties have done, President Trump elevates it — with both his rhetoric and his policies. In doing so, he's given people across America the go-ahead to act on their worst instincts."

"Worst instincts," resulting from that rogue gene that wallows in racism. And here's more on Stephen Miller from the Daily Beast...


"Stephen Miller, the highly influential advisor to President Donald Trump, is the end result of a shadowy network made up of racist organizations and PAC’s designed to push a white nationalist worldview from the fringes into deep inside the White House."

Now there are even rumbles that Steve Bannon is attempting to work his way back into the White House. The combination of Miller and Bannon, especially should there be a Trump second term, God forbid, and with the White House maniac at his highest level of mental instability since entering office, could turn this country into a national Confederate States of America. What would a new flag look like? Would future elections even be allowed?

Miller was a close ally of John Tanton, an Ophthalmologist from Michigan, founder of the Center for Immigration Studies (CIS), and considered by SPLC the "puppeteer" of the nativist movement and a man with deep racist roots. Stephen Miller, practicing Tanton's ideology, is considered the architect of Donald Trump's immigration policies. The Beast's Mark Potok reports...


"Miller is both a promoter and, to some extent, a product of a much wider racist network aimed at preventing non-white immigration into the United States.”

He also thinks there is little chance of Miller leaving the administration, able to now influence, as I stated earlier, a much more mentally unstable Donald Trump, who is already making the worst of bad decisions. I would surmise when the black community sees this rampant racism originate from the highest office in the land, they feel there is just no hope. And they may very well be right as long as Trump occupies the White House and Mitch McConnell controls the Senate.
at May 29, 2020