Why is Donald Trump afraid to finish his physical exam?


Donald Trump started a physical exam six months ago but has chosen not to complete it. His aides have no answer why.


This moron who resides in the White House persists in his refusal to follow the guidelines established over the years that will guarantee the American public that they have a president competent and capable of carrying out his or her duties. The Oval Office lunatic is neither competent nor capable of achieving either of these, but no matter how blindingly, stupidly stubborn Trump is, Americans have the right to know if he is in good enough shape to lead this country.

In spite of not knowing his physical condition, assuming he doesn't, the idiot is taking hydroxychloroquene, a drug that has been deemed dangerous, and of no use in treating COVID-19 from several reputable studies. Hydroxychloroquene is known to be fatal in some cases. T-rump also has stock in the company that makes the drug, as do several of his cronies, and he has regularly been promoting it from the White House. The corruption is endless.

"A president’s annual physical typically occurs at the beginning of a new year. Trump’s 2019 exam was conducted in February, and his 2018 physical was conducted in January. It is uncommon for a president to complete a routine physical exam months apart and in multiple stages."


As I indicated earlier in this article, the American public has the right to know the condition of the leader of their country, especially with an election coming up in less than six months where he is running for office. Agreement and confirmation with this...


“As a part of granting a president as much power as we do, he has the obligation to demonstrate that he is well or, if he is not, to let us know exactly what is amiss,” said presidential historian Michael Beschloss.

With Donald dufus usurping the power of more people and government agencies on a daily basis, it makes the need to know even more critical. The timeline from NBC...


'In November 2019 — six months ago this week — Trump began what the White House described as 'portions' of his third physical during a two-hour examination at Walter Reed National Military Medical Center.

"That visit to Walter Reed was unannounced and remained shrouded in secrecy for two days as the president remained out of public view and as the White House declined to answer questions about it.

"The president’s physician, Dr. Sean Conley, later wrote in a memo released by the White House that Trump’s 'interim checkup' had been “routine.” Conley at the time said a 'more comprehensive' examination would occur this year and that the president’s labs and exam results would be released in a corresponding report."


Based on experience with Donald Trump's physicians, do we even believe Dr. Conley? Back in November of 2019, Stephie Grisham, Trump's former press secretary, was interviewed by Fox News bonehead host, Jeanine Pirro, as follows...


Speaking with Fox News host Jeanine Pirro on her Saturday program, Grisham said Trump is as "healthy as can be" and that he's "got more energy than anybody in the White House."

"You know, Stephanie, he's almost superhuman," Pirro responded. "I don't know how anyone can deal with what he's dealing with. I get frustrated with what's going on in Washington. I want to throw things at the television. But I don't."

Don't that just wanna make you vomit? Grisham did tell NBC that Trump "is fine — perfectly healthy." Well, that may very well be true, but then why hasn't he completed his exam so we can hear it from a medical professional, not some White House airhead.
at May 27, 2020

Is this the end to the NRA? One can only hope

The NRA's head gun nut, Wayne LaPierre, is never at a loss for words, but that look on LaPierre's face (left) stems from the fact ... 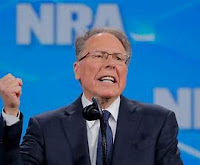