It's arcane, outdated, the antique of American democracy. But, it elected Donald Trump in 2016, and threatens to do an encore in 2020. 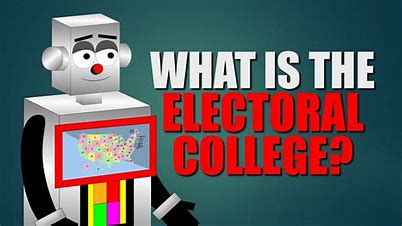 T-rump lost the 2016 popular vote in a landslide for Hillary Clinton, 3-million more, but she lost the election. Common sense would tell us, if three-million more Americans wanted Clinton for president than wanted Trump, she should be sitting in the Oval Office now. I preferred Bernie Sanders but sure as hell didn't want Donald Trump. The year started off right for Trump but his gross incompetence in handling COVID-19 has opened the eyes of many,

CNN, The Point, adds in connection with that...


"two of the most prominent non-partisan political analysts in the country have released new projections that show presumptive Democratic nominee Joe Biden with a clear edge over President Donald Trump in the Electoral College map."

Now, what is the Electoral College?...


The count today is 232 electoral votes for Joe Biden, 204 for Donald Trump. States not included here because they are toss-ups today include: Arizona, Florida, North Carolina, Pennsylvania, Michigan, Wisconsin and Nebraska's 2nd district. Those six represent 102 votes, which could be a big turning point for either candidate. The flip side is Biden appears to be getting stronger with the issues like health care, climate change, guns and economic fairness.

The other flip side is the new support of college-educated whites -- especially white women with college degrees, an area where Trump did well in 2016. And no one wants to have the devastation of American citizens account for election results, but it looks like Trump's incompetence in the handling of the coronavirus pandemic will cost him votes in the industrial belt in states like Pennsylvania, Minnesota, Iowa, Wisconsin, Michigan and Pennsylvania.

Gerrymandering and the Electoral College...


Here's an excuse for the Electoral Electors that almost makes sense. The framers were concerned that the public would not have adequate knowledge to intelligently vote for a candidate, thus, the electors who are supposed to intelligently cast the votes. Although the latter is questionable, it still does not consider the fact that the Electoral College has become completely partisan with the Republican gerrymandering in the last few years. That is the problem.

As the Recent Supreme Court sessions have revealed, constitutional text, history and structure do support that "electors were meant to vote freely." This, of course, could go either way in November, but, again, the direction seems likely to be GOP-sided considering the current structure of state voting districts, which are in favor of Republicans. But with the positive news, above, from two known political handicappers, lookin' good on the left.
at May 20, 2020