Wealth without charity is obscene 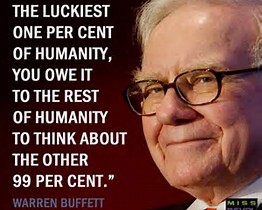 While the United States holds the most private wealth in the world, over $60 trillion, it still has the widest inequity gap of 55 countries that were studied. That is because those with the money have no charity. Okay, maybe they give here and there to organizations like United Way, The Salvation Army, YMCA, St Jude Hospital, Goodwill Industries, among a few, plus their favorite animal shelter or rescue. But I am talking about real charity, sharing of the wealth. Sound Socialistic? Well it is, I am talking about Democratic Socialism of the Berne Sanders kind.

2015 was America's most generous year of giving ever, with donations from America’s individuals, estates, foundations and corporations reaching an estimated $373.25 billion. But here's the shocker. Individuals gave over 14 times as much as corporations did. And from my experience in junk mail fund raising, the single giver is often those who can only afford small amounts. All fingers point to a corporate world where CEOs are pushed for maximum profits and paid generously to get the job done. In many cases a lot of these reach the obscene level of common sense.

Corporate participation is one of the kinds of charities I am talking about and with profits over $6. One such individual is Warren Buffett, the head of Berkshire Hathaway and a legendary investor, who in 2013 complained that he was paying a lower rate of tax than his secretary. But this is offset by the fact that he gave $2.86 billion to charities in 2016. He had given $2.84 billion in 2014.
trillion annually, you'd think they might have a couple of bucks to spare. The other is wealthy individuals, that 1% that Bernie Sanders talks about.

Bill Gates of Microsoft is another billionaire who is a giver, especially with his Bill and Melinda Gates Foundation. It occurred to Gates in 1997, that rather than making sure the world had computers, make sure the world is healthy enough to use them first; that's when he saw the impoverished living conditions of Africa. Back in 2013, Gates said, "I have no use for money. This is God’s work." He was referring to his intentions to eradicate polio. At the time he had already given away $28 billion to charity, and this would continue through the foundation in years to come.

There are others you can see here. But as long as there are 564,708 homeless on the streets of the United States, and over 43 million people are living in poverty, we're doing a lousy job. It seems to me that the corporations of this country should concentrate on these two issues as a goal to bring the U.S. to where it should be. New York and Los Angeles rank in the top five of homelessness worldwide. And the U.S. poverty rate is the highest in the developed world. C'mon America, we can do better than that, and it all starts with wealthy Americans and rich U.S. corporations.