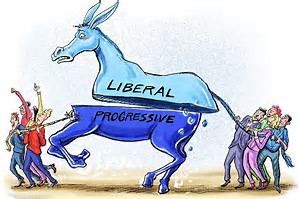 The Democratic Party still does not understand that it is a has-been. Like John McCain. They are so far out of touch that they don't even realize that they almost won a recent election in a heavily red section of Kansas...and with a Progressive candidate. It was "Berniecrat," James Thompson, a guy who was formerly homeless, joined the army and went to college on the GI Bill and got his law degree. Thompson was inspired to run by Bernie Sanders and "... talked about 'progressive values' like universal healthcare, education, and a $15/hour minimum wage."

He beat an establishment Democrat in the primary to run against the seat vacated by Trump's new CIA Director, Mike Pompeo, against the GOP candidate, Ron Estes. When it became obvious that Thompson was gaining in the race, the National Republican Congressional Committee poured in money as did big business. Thompson struggled on his own to raise $292,000 without the Party's help, 95% from individuals. The Democratic National Committee finally kicked in a measly $3,000. "His campaign requested $20,000 from the state Democratic Party and was denied."

Tom Perez did as many flip-flops as Donald Trump has lately, first stating that the Kansas race was one that they could win, then refusing to back Thompson until the last minute, and then with a miniscule amount of money. And then there was the laughable statement from the DNC that, "...giving Thompson money would have actually hurt his chances of winning, because then everyone would have known he’s a Democrat, and Kansans hate Democrats." I thought the double-digit IQs were all in the Republican Party. Thompson lost by 7 percentage points.

Bernie Sanders and DNC chairman Tom Perez are on a multi-city tour to "...rally Democrats around building a stronger party." Maybe I am overreacting but that appears out of line with the Bern's earlier statements on the DNC, especially since Perez was selected on Progressive Keith Ellison. Here's what Sanders told The Hill about his hopes for the DNC and a new Party...


"The best formula, in my opinion, is an updated version of the Kennedys. Jack, Bobby and Ted all combined an insurgent style of mobilizing grassroots workers and voters behind a progressive agenda that appealed to both minority voters and white ethnic and working-class voters."