The blatant hypocrisy of white evangelicals 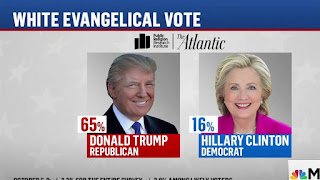 81 percent of white evangelicals voted for Donald Trump for President of the United States. That is the most powerful position in the world and these poor souls helped put someone in it who represents racism, all kinds of bigotry, is an admitted womanizer, and collects people around him as advisers with close connections to white nationalists organizations. If this is Christianity, I am glad I broke with it years ago. On the other hand, those who don't profess any particular religious (68%) voted for Hillary Clinton. My bet is Trump is 1/10 the religious person that Clinton is.

But in my book, religion doesn't make a damn bit of difference when running this country. There is, of course, the separation of church and state, which has been trampled over in recent years, but the values a President needs don't stem from the Bible, they come from the realization of what is right for this country and its people. Bernie Sanders had what it takes to do what is right for all the people, evening up the injustices bestowed on the poor and needy, even up to the middle class, by the wealthy and the Republican administration. Even some Democrats helped out.

Here's how Paul Djupe, of the Washington Post explains it...


"How did we get here? One answer is sorting. That is, people may reevaluate their religious membership when they sense political (or other) disagreement, leaving their houses of worship more homogeneous organizations. While this happens across the religious spectrum, here we highlight new evidence that disagreement over Trump’s candidacy actually led some evangelicals to leave their church."

In the latter, above, it was around 15% who felt that politics had become too divisive and left their houses of worship in the study done. Agreed, Donald Trump is the most divisive issue to drive politics in many years and the results weren't really that conclusive with Trump's support on a scale of 0-100, coming in at an average of 48. But then Clinton's was only 25, indicating once again that the wrong Democrat was nominated to run. But the big question is, what in the world could have driven that 81% to vote for a man that is so non-Christian in his values?

According to several surveys, Trump attracted the white, uneducated vote, which must have included at least some of those white evangelicals, perhaps like many others who voted Republican and were highly uninformed. The WP report also found that the evangelical clergy had very little to say about Trump in church, perhaps to keep from alienating the believers. And this no doubt is a rebuilding effort for the liberal and moderate church-goers who are fed up with the religious right. They come to church for the God experience, not the Donald John show.

Pew Research says that one-third of those who attend evangelical churches have less than a high school education and although this includes blacks, the latter is still a small amount of this population. I do not remember a hell of a lot about the specifics of my college education, but the one thing that higher learning taught me was how to find what I wished to know. Even before the Internet, I spent time in libraries when I was curious about something, not realizing at the time that I was actually doing research. And there is nothing more important than research in blogging

The downside of all this is that if we continue to have uninformed people going to the polls in each election, we will end up with results like a Donald Trump. A Mitch McConnell. A Paul Ryan. A Trey Gowdy. A Sarah Palin. A Ted Cruz. A John McCain. A John Boehner. A Jan Brewer. A Marco Rubio. A Newt Gingrich. A Darrell Isssa. A Steve King. A Michele Bachmann. A Joni Ernst. A Jeff Flake. I could go on all day but would just end up talking about a Republican Congress that has been a stumbling block to the good of this country since it took office. We need a change in 2018.