How the hell do we keep explaining these gun deaths 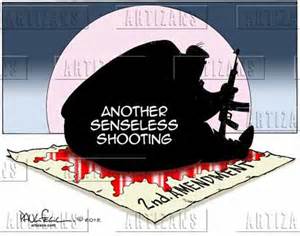 There is no way. But at the same time, we still do nothing about it. In January of 2017, Trump made a series of stupid comments on guns and the 2nd Amendment, sounding almost as dumb as the NRA's Wayne LaPierre, about the sanctity of the 2nd, and bullshit like, "...the right to keep and bear arms is a right that pre-exists both the government and the Constitution, noting that government didn’t create the right, nor can it take it away." If he is implying that guns were around before the U.S. was a country, and before there was a Constitution, of course they were. They were used in a war.

But it was the Founding Fathers that felt the need for a 2nd Amendment at a time they still required protection from the British and there was basically no real police force to enforce the laws. People needed to protect themselves and having weapons in the home made sense. It doesn't now. We have a federal armed forces and law enforcement on the local, county and state levels. Sure, people are killed with guns on the street but that is because there are so many guns on the street. Get rid of all the guns and you get rid of the problem. But we know that will never happen. Is there an answer?

Here's an excerpt from a post I did about what the Founding Fathers really meant...


"It occurred to me recently that enough hasn't been said recently about the intentions of the Founding Fathers in the Constitution for the rights and restrictions of gun owners. With individual and mass killings by guns a regular daily occurrence, and the fact that even in light of the horrific number of deaths, including many children, the National Rifle Assn. (NRA) headed up by Wayne LaPierre, still maintain that the right to have a gun is more important than human life. LaPierre bases that right on the 2nd Amendment, given to us by the Founding Fathers. He claims it is inviolable."

And more on the same subject...


"Here's an incident of the typical thinking of a gun nut: In a tirade against CNN’s Piers Morgan, Alex Jones argued, 'The Second Amendment isn’t there for duck hunting. It’s there to protect us from tyrannical government.' Like this government could ever come together long enough to start anything, much less tyranny. It's a laughable argument and there's much in history to disprove the gun nuts. Truth-Out.org also reports first-hand documents from 1789 detail the First Congress' debate on arms and militia detail a constant theme: "the 2nd Amendment was created to protect the American government."

In one of the most egregious acts in the field of journalism, Jan Larson McLaughlin, the Editor of the Bowling Green Sentinel-Tribune in Ohio, was fired for insubordination by the Publisher, Karmen Concannon. The reason, McLaughlin wrote an article about the NRA that was unfavorable but true, re. James Evans, a geology professor, for his email to State Rep. Tim Brown in which he called the NRA a “terrorist organization." McLaughlin found no problem with that and neither do I. But she was fired and the Publisher refused any comments on the matter. Read the editorial!

I am writing this post as a reaction to the most recent murder of, Karen Smith, a school teacher from San Bernardino, California, by her husband, also killing an eight-year-old student standing behind her. He too was was struck by gunfire. Apparently the eight-year-old that was killed, plus the other student who was shot, were simply innocent bystanders. The NRA and its gun nuts will now scream for arming every teacher in the country; guns are already legal with students in many classrooms nationwide. I can just see it now; OK Corral goes to school.