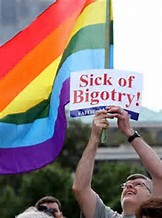 In April of 2015 the Supreme Court made its decision to legalize marriages between same-sex couples. According to ProCon.org, it was...

The Court ruled 5-4 "...that gay marriage is a constitutional right, meaning that all 50 states must allow it and that all existing bans are invalid. The decision concluded a decades-long battle over whether gay marriage should be legalized."

Pretty conclusive, I would say, from a conservative Court, with a decision that you would think even the double-digit Republican lawmakers in North Carolina could understand. But what stands in their way is a bigoted atmosphere within the state legislature that won't let go of the discrimination of anything that isn't just like them. Rednecks. The N.C, law called  “Uphold Historical Marriage Act,” is a bill arguing that the Supreme Court ruling “exceeds the authority of the court relative to the decree of Almighty God.” Now we're back to 'God made me do it.'

There are many right-thinking people in North Carolina who oppose the bill, realizing that they have already been through this crap once and don't need a repeat. Their even-minded reasoning chastised the bill...


"...as an unnecessary step that will stoke division in a state still reeling from the fallout of a controversial bill regulating which bathrooms transgender people can use."

"It was Democratic Gov. Roy Cooper who criticized the bill on Twitter, labeling it 'wrong' for North Carolina. 'We need more LGBT protections, not fewer.'” Obviously it takes a Democrat to understand the rights of individuals, no matter their race, color, gender or sexual preference. Stephen Griffin, a professor of constitutional law at Tulane University, agreeing with other Constitutional law experts, said it reminded him of "tactics" used in the 1950s and 1960s. If you recall, the Civil Rights Act was passed in 1968. N.C. Republican legislators should have had time to read it by now.

The bigotry against the LGBT community goes hand-in-hand with the racism that has existed in North Carolina for decades. The state is consistently listed in the top five racist states with PEI MAG most recently placing it at number five. But what is much worse is Southern Poverty Law Center's statement in Feb. 2017, "Organized hate is alive and well in North Carolina..." The SPLC has a "Hate Map" that shows 31 hate entities operating in North Carolina including "...the Ku Klux Klan, Neo-Confederates, Skinheads, and anti-Muslim groups." These groups attack...

"...entire classes of people based on things like race, religion, and more."

Fortunately the number 31 puts the state just outside the top ten offenders, but what is more significant is the fact that the number 31 is 3.6% of all nationwide hate groups. North Carolina's population is only .33 of the total U.S. population, completely out of proportion when ranked with other states. I am picking on North Carolina because it is beyond me how lawmakers could be so stupid to beat a dead issue like this. At least Arizona learned from their Immigration Bill 1070; it is not going to fly so they left it alone.

Finally, in 2012, I did a post on VR Phipps, a Command member of the North Carolina Tea Party from Faison, NC, just east of Fayetteville. Phipps drove his "Hanging Truck," with Barack Obama hung in effigy around the country all the way to New York City. I had a couple of conversations with Phipps that were off the charts since he denied everything, including being himself. Finally ended the conversations with him continuing to deny he was a Tea Party member, but did admit he was a Republican. You can see the dialogue and Obama hung in effigy on my post here.

And North Carolina isn't the only state to challenge the Supreme Court on same-sex marriage. Arkansas did the same, but after strong resistance shot it down. "Legal experts said the legislation didn’t stand a chance." And the good news is that, "North Carolina House Speaker Tim Moore, a Republican, released a statement Wednesday saying the bill would not receive a hearing this session." It's great that the thinking people prevailed...this time.