Arizona lunatics and other politicians

The time has come to examine the latest lunacies coming from the politics of the state of .  Especially if you live right in the middle of it and experience the madness on a daily, sometime hourly, basis.  We’ve had our share of scandals lately—actually they were in full force when I moved to the state over 20 years ago—but GOP state politicians and many others in the conservative culture continue on their merry way, completely oblivious.

﻿
﻿ Some of the most infamous in the last few decades were the Keating Five, AzScam and the alt-fuels fiasco.  I’ll let you look these up individually because it will provide some excellent local color into the state that is known for its wondrous Grand Canyon and beautiful deserts, along with neo-Nazi J.T. Ready who killed 4 in his family plus himself recently, another racist and illegal immigrant hater Russell Pearce, and a completely incompetent Gov. Jan Brewer.

That’s just for starters.  USA Today did documentation recently of the “streak of scandals,” as they put it, that continue in .  The key word here is “continue” because it is a sure-fire thing that it will only escalate in the future if we don’t get rid of the Republican radicals in this state, starting at the top with the governor.  And here’s the understatement of the year by the newspaper: “ has never been known for squeaky-clean politics.”  WOW!

The Arizona Tea Party favorite is the Obama birther issue, which now has support again from the wacko Donald Trump.  At the same time the state legislature is pushing a bill to require BC certification, not for Mitt Romney, but just for Barack Obama, as orchestrated by Sec. of State Ken Bennett.  Of course Maricopa County Sheriff, Joe Arpaio, demanding some of the limelight, even sent volunteers and one of his deputies to for verification just for TPers.

﻿
﻿Some guy in the “letters” section recently said that if we progressives don’t like it here, go to .  I moved to from that state, primarily due to ’s gang war problems.  Little did I know that the gun culture here was designed to put more weapons on the street in the hands of anybody who wanted them.  I happen to love the state of and some time ago decided to be a part of the change that will rid the state of these fanatics.

Back to the scandals, Arpaio accused by the feds of discrimination against immigrants, as well as financial irregularities in his department.  Arizona Sheriff Paul Babeu from , accused of violations of the Hatch Act, and after outing as a gay, accused of threatening deportation of his Mexican boyfriend if he didn’t keep quiet.  Attorney Andrew Thomas and his deputy Lisa Aubuchon, were disbarred in April for ethical misconduct.


Still just getting started.  Democratic State Rep.s Ben Arredondo and Richard Miranda took their turn in the barrel with the former indicted on federal charges of bribery, mail fraud, extortion and lying, while the latter quit the Legislature this year before pleading guilty to federal felony wire fraud and attempted tax evasion charges.  Historian Jack August says, "The decibel level of what's happened recently is unprecedented in the history of ."

In 1988, the impeachment and removal from the governor’s office of Ed Mecham who violated campaign finance laws and was caught lending $80,000 of public money to a car dealership he owned and ran before becoming governor.  And there was the 1997 criminal trial conviction of Fife Symington who resigned as governor just before being impeached.  Former Sen. Dennis DeConcini, current Sen. John McCain were involved in the Charles Keating financial scandal. 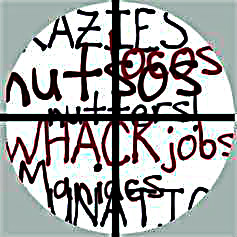 Currently, Arizona Atty. General Tom Horne is under investigation by the Justice Dept. “for alleged illegal coordination with an independent third-party group during his 2010 election campaign.”  You would think the man running for the state’s highest legal post would know the law.  Bruce Merrill, a veteran pollster and professor emeritus at Arizona State U. said: "Outside of , we certainly do have this image of instability and a kind of weirdness."

And although the scandal-mongering has been going on for decades, has the recent gang of incompetent conservative fanatics raised the bar?  Yes, says former Maricopa County Attorney Rick Romley, a Republican, who says that, “concerns about public corruption are greater today than at any time during his career.”  That’s another conservative speaking, although you wouldn’t put him in the same category as the wingnuts running the state today.

On top of everything else comes the Fiesta Bowl scandal that was directly related to state politicians.  In 2010 it was discovered that bowl CEO John Junker spent $4 million since 2000 to curry favor from BCS bigwigs and elected officials, guys like former State Senator Russell Pearce who was recalled from office for his fanatical views and other shenanigans.  Junker was fired and there now seems to be a return to normalcy in ’s biggest sporting event.

There’s more which you can see in the USA Today article.  A Southern California psychologist and assistant professor of management and organization at the 's Marshall School of Business, Jen Overbeck, commented:

“People appear to be more willing to commit ethical transgressions if they feel that it is in service of some higher purpose.  I'm not saying that they have good intentions. It's just how people justify to themselves what the rest of us see as some pretty heinous unethical actions."

The question here is how do the people of justify returning these people to office year after year, as well as electing new clones just like them?  If ever a progressive sweep was necessary it is in the November elections.
at June 13, 2012