You will vote in November how your TV tells you to 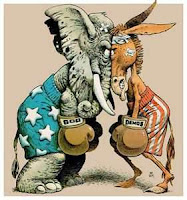 Well, that’s not all of us.  There are still some thinking individuals out there that will examine the issues and closely evaluate the candidates, then cast their votes in an intelligent way.  Sure, they also watch the television ads but most of them just laugh off the sheer stupidity of two sides trying to make each other look like idiots, socialists, lovers of money, suckers for the needy, the list goes on and on.  That’s the reason most of us have to go to the trenches for our information.

The GOP is best at the attack and hate ads, created and nurtured to this day by GWB’s top henchman, Karl Rove.  In his latest, “President Barack Obama wears shades, sings Al Green, dances with Ellen DeGeneres, quaffs a Guinness, calls hip-hop megastar Kanye West a ‘jackass,’ and "slow jams the news with Jimmy Fallon.” He is being portrayed as a “rock star,” according to Oliver Knox of Yahoo News.  A dangerous point being made is that popularity is bad.

My headline is based on an article on CNN by Julian Zelizer, “How political ads can elect a president,” that illustrates the issue by documenting some current and past political advertising.  He starts with Rove’s American Crossroads group in an ad claiming that President Obama has “failed to help American families.”  Although the fact that the President hasn’t been able to help these folks is true, the blame lies entirely with Republicans that block everything he does.

You might remember Roger Ailes, Richard Nixon’s 1968 campaign consultant who said, “Television is no gimmick, and nobody will ever be elected to major office again without presenting themselves well on it."  Nixon didn’t and he lost the election to John F. Kennedy by 84 electoral votes.  It was Dwight Eisenhower, who Nixon served with as VP, who took the advice of Rosser Reeves who thought it the best way to reach the voters.  He was right.

On the other hand, Democrat Adlai Stevenson, a statesman, not a politician, said, "The idea that you can merchandise candidates for high office like breakfast cereal is the ultimate indignity to the democratic process." Eisenhower won that election and the process of “merchandising” a candidate was here to stay.  What is so pathetic is the fact that treating candidates like a commodity has taken away the public’s ability to know just what they stand for…only against.

If you want to see what the old political ads on television looked like, Zelizer suggests a site called Living Room Candidate, which lists them from 1952 to 2008.  The latter an election of both parties offering change instead of more of the same.  An African-American President was elected for the first time over an old warhorse that should have quit long ago, Arizona Senator John McCain.  Well what we did get was change but in the form of a divisive GOP against Obama.


Zelizer illustrates what types of spots will dictate how your decision will be made in voting for President in November.  First there is the “character assassination spot,” designed to show “perceived weakness of their opponent.”  Lyndon Johnson used this in his “Daisy ad” which was supposed to portray Barry Goldwater with his finger on the nuclear button.  It did and Johnson won.  Eisenhower utilized ads like “High Prices” affecting voters at the time.

In 1972, Richard Nixon used how Democrats would cut the defense budget, thus, weakening the security of the to beat George McGovern.  Then in 1988 there was George H. W. Bush’s “Willie Horton” ad to show Michael Dukakis was weak on law and order.  Bush won.  As an example of the ludicrousness of these ads, the prison furlough program, involving Willie Horton, wasn’t even signed into law by Dukakis.  But the oblivious bunch didn’t bother to find that out.

Zelizer leaves us with the “I am good and you should elect me” spot.  {My terminology}  He says the candidates boast of either what they have accomplished or what they will accomplish.  Jimmy Carter used this in 1976, Ronald Reagan in 1984, and Barack Obama with his “Change” slogan in 2008.  All three were elected, although some negativity crept in on both sides.  But it was clearly refreshing while it lasted.

The author warns that Obama and Romney must be careful of the spots they run, as well as those run by Super Pacs that seem to have created a life of their own.  The Pacs are almost completely uncontrolled in the money they can raise and the people they get it from, particularly when it comes to identifying amounts and the donors.  And this is where most of the dirt and hate originates from.  It’ll be interesting to see just how many “positive” messages we get leading up to Nov.
at June 07, 2012