48 million people without health insurance in the U.S. spells disaster 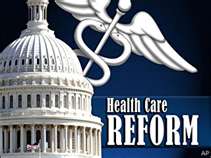 The Supreme Court will decide this month just what to do with President Obama’s health care reform law.  Predictions range from a complete repeal to dropping certain parts, to simply a modification.  I have talked to several people, including doctors and other health care professionals, and the general consensus is that the medical community doesn’t like the bill.  But when pressing these folks further on specifics, I question if some of them really understand the law.

At the end of May, a CBS/New York Times poll asked some pointed questions about Obama’s health care reform.  First, do you approve?  34% do, 48% don’t.  Another, how should the Supreme Court rule?  24% keep entire law, 27% overturn mandate (must buy insurance) but keep rest of law, 41% overturn entire law.  55% of respondents feel that political positions will play a part in justices’ decisions compared to 32% who think decisions will be decided on a legal basis.

37% think the health care bill went too far; 27% not far enough; 25% about right.  So in this category we have a total of 52% that either wanted more law or thought it was just right.  That sort of flies in the face of the above figure indicating an approval rate of only 34%.  It would seem that the undetermined figure of 18% who don’t approve or disapprove, might lean toward approval.  28% claim knowing a lot about the law and 62% of them disapprove, 58% strongly.

Meanwhile, back at the emergency room, 26% of the population had a health insurance gap in 2011.  That’s 48 million warm bodies that probably went without preventive care, and ended up in the ER when there was an emergency or less in some cases.  This study, the Commonwealth Fund Health Insurance Tracking Survey of U.S. Adults, also found that factors impacting this problem were losses or changes in jobs by either the individual or his or her spouse.

Out of this 48 million, 69% reported being out of a job for a year or longer, 57% two or more years without coverage.  Although I don’t have the figures to back this up, it is clear to me that some of the reasons for so many bankruptcies and home foreclosures could be attributed to medical costs in lieu of insurance.  The savings were drained which resulted in giving up health care coverage, then the other two undesirable options.


The Commonwealth Fund discovered that between 2008 and 2010, 9 million people became uninsured after losing a job, meaning that without employment, health care may become a luxury.  By 2014, and due to the Affordable Care Act, insurance plans can’t charge higher premiums, or drop you for pre-existing conditions.  State insurance exchanges would be available for those who lose their coverage to go.  There would be tax credits and expanded Medicaid.

There are 123.8 emergency room visits each year; 42.4 million are injury related.  That’s 41.4 visits per 100 persons with 13% of the 123.8 million resulting in hospital admission.  The Amaranth Group says that approximately 80% of the 123.8 million ER visits annually are “non-emergent.”  Emergency rooms are already overloaded in some cities, and once the 48 million without health care coverage are without it long enough, things are bound to start going wrong.

Yes, I am proposing a scenario where if even a small percentage of the 48 million start to experience serious medical problems, some probably life-threatening, the system will be unable to handle it.  And many of these people can blame their lost jobs, bankruptcies, foreclosures or a short sale on the insane corporate anti-consumer practices of big business.  Like the financial industry that almost brought this country to the brink of disaster.

But some of these people don’t want to buy health care insurance as the law mandates so what do you do?  Deny them medical services in an emergency?  Why not, it was their prerogative to proceed without insurance?  But we know we wouldn’t, so we’re right back with the same dilemma, meaning there must be some regulation to insure that everyone pays his or her fair share.  Maybe health care reform isn’t at its very best yet with this law, but it’s better than nothing.
at June 11, 2012