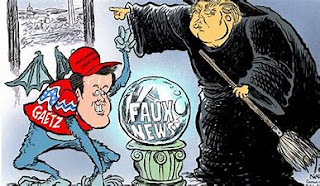 "Republican Rep. Matt Gaetz endorses Tucker Carlson's "great replacement" theory." Salon says many lawmakers, mostly Republican, I say, are concerned over a growing ethnicity in the U.S. population. Aside from the fact the Republican Party is a racist group of dough-heads, the other side of this is a fear these ethnic groups will be predominantly liberal. Here's an excerpt from Salon...

Fox's Tucker Carlson has been spewing this garbage since April, " a baseless white supremacist theory." Carlson admitted recently, on the air, that he lies, just to make his point. Yet thousands of double-digits watch him regularly, taking advice from

an admitted phony. This would be Matt Gaetz's kind of person since a recent POLITIFACT found Gaetz "Mostly False" on several of his statements. Here's more on the theory...

"In 2019, the theory inspired a mass shooting in El Paso, as well as the Christchurch mosque shootings in New Zealand that same year, Insider noted. During the 'Unite the Right Rally' in 2017, hundreds of white supremacist protesters gathered in Charlottsville, Virgnia [SP] chanting slogans like 'You will not replace us' and 'Jews will not replace us,' alluding to fears around America's changing ethnic landscape."

This adds antisemitism to the issue. And just this last Saturday Gaetz confirmed this theory, tweeting that Carlson "is CORRECT about Replacement Theory as he explains what is happening to America." There is despicably more...

"Gaetz also added that the ADL – a Jewish non-governmental organization dedicated to combating anti-Semitism and led by Jonathan Greenblatt, a former Obama administration official – is a "'a racist organization.'"

Republicans now fear that, due to the recent census, their gerrymandering strategy will fall short of their normal counterfeit drawing of districts that wins them elections. Now the GOP has picked up the Replacement Theory as a means to gain more seats in both houses. The House is in full swing... 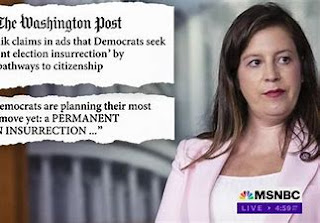 "House Republican Conference Chair Elise Stefanik, R-N.Y., two weeks ago launched an ad campaign warning their constituencies that Democrats are working toward 'a PERMANENT ELECTION INSURRECTION' by expanding pathways to citizenship for immigrants. Last week, Rep. Brian Babin, R-Tex. similarly claimed on Newsmax that the Democrats "want to replace the American electorate with a Third World electorate that will be on welfare."
at September 29, 2021