Looking past Trump...How do we dispense with Pence? 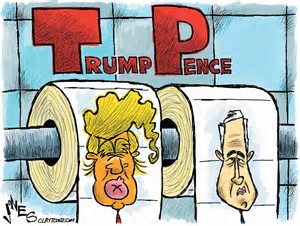 The Koch Bros. were the kingpins behind the Tea Party. Mike Pence is and always has been one of its staunchest supporters. Do we want Charles Koch controlling the Oval Office? Backing up, Donald Trump is either at the point of implosion, or, any day now he will make the most awesome and dangerous mistake of his presidency and the numb nuts in Congress will finally do their job and impeach him. In either case, we end up with Mike Pence and, as you can see from the above, that could be even worse. But maybe not as bad as Paul Ryan?

So, what do we do once we are saddled with another lunatic in the Oval Office, one, by the way who is afraid to be in a room alone with a woman other than his wife.? To start with, it seems to me that the latter is an indication of some form of instability, one that does not complement the job of President. But there is much more starting with Pence's claim that...


"...he did not know of former national security adviser Michael Flynn’s work on behalf of foreign governments until he learned of them in media reports."

Rep. Elijah Cummings reaction, “Either he's not telling the truth, or he was running a sloppy shop.” Now this sounds like he is mirroring Donald Trump. Like President, like Vice President? Geeez, you would think that these dufuses would at least try to come up with something original. Cummings even sent a letter to Pence as the President of Trump's transition team last November regarding Flynn’s ties to the Turkish government. The Representative's office received a receipt for the latter. Thus, the statement that Pence is either not telling the truth, or running a sloppy shop.

Cummings marveled over the fact that when you pass along information like this about someone Trump has nominated, and eventually took the office of National Security Adviser, the number one guy with America's secrets, and who was also connected to a foreign government, hundreds of red flags should go up. Thy did and Flynn was fired. Through all this Pence stood by his earlier statement-sound like someone else in the White House? It was, perhaps, Karl Rove that perfected the use of dirty politics, including lying, under George W. Bush and the GOP has just improved it.

Just one day later, Trump told "NBC News's Lester Holt that he had already decided to fire Comey and would have done it regardless of the DOJ's recommendation." WP asserts...


"Pence could argue that Trump technically did accept the recommendations of the Justice Department. But, again, that would be highly misleading, based on Trump's own comments that he had already made up his mind."

The long and the short of Mike Pence's statements to defend the Trump administration indicate a combination of the fact that he will say anything to protect the administration, and/or, he is just so far out of touch with Trump and his advisers, he really doesn't know what's going on. In either case, if Pence had to assume the presidency in an emergency, it could be even worse than it is now. So back to my headline, "How do we dispense with Pence?"