DNC convinced it has right to rig Democratic primary 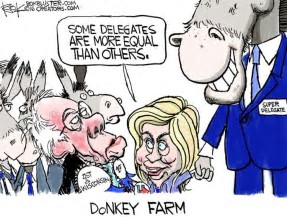 Not only are they convinced of this but the Democratic National Committee is using this premise as the basis for their defense in a lawsuit against the organization for Debbie Wasserman Schultz's bias toward Hillary Clinton in the 2016 Democratic primary. The DNC said in a court of law that the party is not obligated to run a fair and impartial primary election implying, "We rigged primaries. So what." Wasserman Schultz agreed, apparently, being the ringleader in the rigging and being fired in disgrace as a result. The losers, the American voters and Bernie Sanders.

The charges against the DNC and Wasserman Schultz include fraud, negligent misrepresentation, unjust enrichment and negligence. According to RT, "The suit has three different classes of plaintiffs - those who donated to the DNC, those who donated to the Bernie Sanders campaign and all members of the Democratic Party." I fit into the second class, those who contributed generously to Bernie Sander's campaign. It would be comforting to see Wasserman Schultz and whoever was in this with her go to jail. I am sure Bernie Sanders will agree.

It doesn't appear the DNC defense has much of a chance based on a comment by Tom Perez, the current chair. WND.com reports while campaigning to become the DNC chairman, he even admitted in February that the Democratic Party primaries were rigged in favor of Clinton. And on top of all this, Democratic influential Donna Brazile admitted she used her position at CNN to pass on debate questions to the Clinton campaign. It's beginning to become apparent why many in the Democratic establishment are trying to distance themselves from the Clintons.

Take a look at the following and then wonder with me just how this man was ever admitted to the bar. Here is DNC attorney Bruce Spiva's argument...

God forbid. The man sounds like Donald Trump. This brings up once again my suggestion that we dump the Democratic Party and start all over for the liberals. This time we'll get it right because we'll populate Washington with Progressives and get rid of the McConnells and Ryans and the rest of the Republican riff raff. 2018!
at May 05, 2017