More on why Trump may be impeached 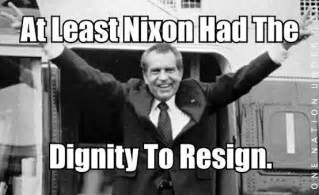 Yesterday I made the statement in my headline "Why GOP may be planning Trump impeachment," and in the post I recovered the issues that have led the sane members of the public to wonder at this point just what is going on in Donald Trump's administration. His administrative staff and his closest advisers apparently don't, so the bungling idiot, who listens to no one, just goes stupidly on his way. Aren't we lucky that there has been no major crisis to contend with because it is certain that, whatever the dilemma, T-rump would screw it up, possibly even getting us into a war.


“Obviously, they are in a downward spiral right now and have got to figure out a way to come to grips with all that’s happening,”

Congress has not established a relationship with Trump allowing it to pass legislation that has been on the agenda since it scored both houses of Congress and the Oval Office. Unfortunately, the latter has not cooperated and their master plan to conservatize the country is in a constant case of chaos. And as long as there are die-hard T-rump supporters like Joseph Amodeo, age 19, of Staten Island, NY, the White House lunatic isn't likely to back down. Amodeo "...incorrectly praised the president for raising New York's minimum wage, something enacted by Democrats in the Legislature."


"If you're wishing for him to fail, you're basically wishing for the pilot of the plane to crash. You just gotta stick by him and hopefully he does things that benefit everyone."

Joseph Amodeo, in a nutshell, showcases the sheer stupidity of those who support Trump. The dismal, out-of-touch world they live in allows this gang of poor souls to survive, much as the ostrich does when it puts its head in the sand. Pathetic but so true. Here's the Washington Post's assessment of Donald Trump's leadership to date...


"He has provided limited leadership on health care and limited leadership on taxes. He has offered direction that does not always conform to the preferences of conservatives in Congress. He has offered guidelines but no detailed blueprints. His priorities are not always those of congressional Republicans. He retains the power to sign legislation but in all other ways seems to frustrate or complicate efforts by congressional Republicans to bring those measures to his desk."

And they cap it off with the fact that T-rump is nowhere near the deal maker he professes to be. In other words, he falls short on just about every level of what it takes to be President.

So, what about a special prosecutor to investigate both Donald Trump and Michael Flynn, in relation to Russians interfering with the 2016 election, Flynn's relationship with Turkey and what Trump knew in advance of his appointment along with what James Comey is about to say before Congress? Republicans will stand by him until their constituents demand otherwise. That's when the shit will hit the fan and that's when Republicans will be forced to do something they abhor doing, the right thing. Backed into a corner, they will do the unthinkable to a Republican President. Impeach him.

Here's my reasoning. The 2018 midterms are fast approaching and the GOP has already lost ground in several races nationwide. A Republican Congress could easily lose the Senate with Democrats needing only 3 seats to take a majority. There's even talk of taking enough seats in the House to at least make it harder for the GOP to pass its legislation. I don't think Paul Ryan or Mitch McConnell want that. Their only option is to throw Donald Trump under the train which means this option will mean impeachment of the President of the United States.