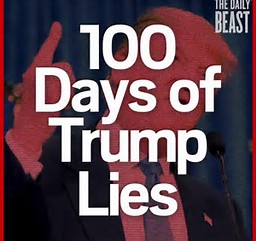 Cenk Uygur of The Young Turks did it best in his video dehumanizing Donald Trump for his rambling, incoherent interview with the Associated Press. He points out both the senselessness of this maniacal dufus and the number of times he is wrong, which is every time he opens his mouth. And now the Washington Post has done a Fact Check article that explores some of the most outrageous falsehoods and misstatements. In some cases, the Fact Check people point out just how many times Trump has actually made his false claims. Here's the first...

Not true. Lockheed already had planned cost reductions. Lockheed’s CEO Marillyn Hewson, announced costs would come down “significantly before ever meeting with Donald Trump. This same clam was made 14 times. Next...

“President Xi [of China], from the time I took office, they have not been currency manipulators.”

In fact, China had not devalued its currency for about two years prior to Trump's election. And during the 2016 election, Trump repeatedly accused China of being a “world champion” of devaluing the yuan. Next...


“You live by the sword, you die by the sword, to a certain extent. But we create a lot of jobs, 500,000 jobs as of two months ago, and plenty created since. Five hundred thousand. … As an example, Ford, General Motors. I’ve had cases where the gentleman from China, Ma, Jack Ma (chairman of Alibaba Group), he comes up, he says, ‘Only because of you am I making this massive investment.’ Intel, only because of you. … The press never writes that.”

Trump likes to take credit for corporate decisions that were made before he was elected president, in most cases fabricated. Here's a list compiled by Fact Check. Ford and General Motors made decisions for expansion but both said they had nothing to do with Trump. Next...

Typical big mouth, Trump braggadocio with claims he should know he can't fulfill. He first quoted $8 billion for a border wall, then Fact Checker got estimates as high as $25 billion. Senate Democrats in April came up with an even higher estimate: nearly $70 billion, and that's before paying for land acquisition.

There's more and you should look at the whole WP Fact Check article here.
at May 04, 2017