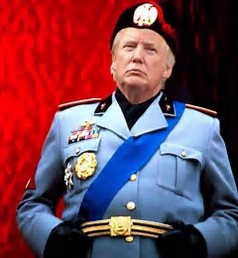 The U.S. government was set up as a model of checks and balances to ensure that one branch of government did not usurp all the power of the land and become dictatorial. Like the office of the President. But Donald Trump has decided that this kind of government does not fit his personality, rather, he prefers that the power should be consolidated within his office. That's right, give it all to Donald John. There is nothing this maniac would like better than to be able to dictate his daily gibberish to the Congress and judiciary as the lord baron of America.

But wait, there are things in this Washington Post article I am quoting from that Trump says that I agree with. God forbid but it's true. He indicates the politics of Washington are archaic. TRUE. He says the rules of the House and Senate are archaic, and when you consider what this Congress has accomplished in the last few years. TRUE. He wants to get rid of the filibuster, some pissed off congress person ranting for days just because he or she didn't get his or her way. DUMP IT. In the end, though, what a switch from a guy who decried Obama's power grabs with executive orders.