Will Arizona be the pulse of the Hispanic vote in November? 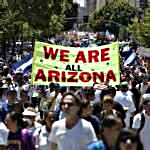 I raise this question because is the center of immigration reform on the state level with its first nationwide anti-immigration bill SB-1070 that is still before the U.S. Supreme Court.  v. was argued April 25, 2012, and the question presented was whether federal immigration laws preclude ’s efforts at cooperative law enforcement and preempt the four provisions of S.B. 1070.  The high Court is expected to give its decision in June.

Arizona Federal Judge Susan Bolton blocked the most contested provisions of SB-1070 in July of 2010, shortly after the law was passed.  That is what sent the gang of autocrats gyrating to the Supremes.  There are no other officials in other states throughout the more vocal than those from , with their challenge to Judge Bolton’s decision as the centerpiece.  What the Supremes decide will have a definitive effect on Latinos in and across the country.

The villains in this whole fiasco are easily identifiable and are at the source of many of ’s many problems.  These three, along with a state Republican legislature that is clearly on another planet, can also be credited for most of the ridicule that is regularly thrown at the state.  The terrible three are Gov. Jan Brewer, former state senator Russell Pearce, and Maricopa County Sheriff Joe Arpaio.  Together they resemble a very untalented Three Stooges. 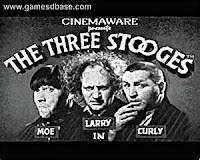 Jan Brewer is laughable as perhaps the most incompetent governor to ever serve a state in this country.  Brewer is detested by most Hispanics for signing SB-1070.  Russell Pearce, the main supporter of SB-1070, was voted out as a state senator, primarily by Latinos because of racist and other extremist views.  Joe Arpaio has endeared himself to Hispanics with his regular sweeps that pick up illegals—and even legal citizens—for minor offenses of the law for ID.

There are 1.8 million Latinos in in 525,000 households, just under 30 percent of the total population, with an average age of almost 26.  59 percent of this group is making more than $35,000 a year which puts them in a formidable position to determine the outcome of elections.  If they can be convinced to come to the polls.  But even some of the legal immigrants are scared to come to the polls because of the threats of Brewer, Pearce and Arpaio.

The fact that the Dream Act is still important to Hispanics is a recent protest in , and it wasn’t against Republicans but aimed at democrats for not doing enough.  This only emphasizes what many Latino advocates have been saying of late.  It will make little difference if you get this group enthused over the November election if their concerns aren’t turned into priorities by both parties.  President Obama promised to overhaul immigration in 2008 and hasn’t fulfilled.

Another Hispanic concern is education, according to a poll from the American Federation for Children and the Hispanic Council for Reform and Education Options.  58 percent of Latinos in five battleground states want more on what the candidates will do, compared to 49 percent overall.  This parallels interests from African-Americans in the past because they wanted better educational standards for their children.  Jobs, the economy and federal deficit are also ranked high.

The NPR article above estimates that 22 million Latinos will be eligible to vote in November, with a potential voter turnout of up to 12 million.  This is a 26 percent increase over 2008 and would be a new record.  However, on Univision, the Velasquez Institute predicts that national Latino turnout this fall will be no higher than 10.5 million votes cast.  What makes all this important is the fact that President Obama was the first to win the office without the white vote majority. 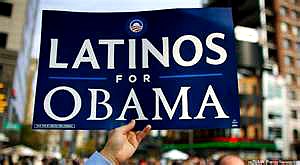 is now a hub for protest for a pro-Hispanic ‘super PAC’ aimed at Mitt Romney.  At a fundraiser in , Romney acknowledged the possibility of losing the Latino vote.  He said, “If its {Dems. momentum} not turned around, it spells doom for us.”  In the Los Angeles Times, a new national poll, conducted for NBC News, the Wall Street Journal and Telemundo, showed him trailing the president 61% to 27% among Latinos.

The liberal super PAC began airing TV spots in on May 24, where the strategy is to characterize Mitt Romney in the same light as two of the most “reviled” politicians in the Hispanic community: Gov. Jan Brewer and Maricopa County Sheriff Joe Arpaio.  Brewer endorsed Romney just before ’s February primary, Arpaio stayed neutral having endorsed Rick Perry who quit the race.  The ad runs several weeks in English and Spanish.

is clearly evolving from red to purple with the Latino population reacting to SB-1070 and the sweeps of illegals by Sheriff Arpaio.  That’s the best sign progressives have seen in for years but the question is whether they take full advantage of the situation.  There are non-Hispanic white and black populations that must also speak out in November.  They are there.  But apparently not as passionate as conservatives.  This needs to change now.
at May 30, 2012