Mark Zuckerberg, founder and the leader of Facebook, has repeatedly shown his arrogance in the selecting, handling and sharing of Facebook user data.  Take a look at what results from a Google search of “Facebook Privacy Issues.”  In November of 2011, the feds accused the company of engaging in “unfair and deceptive” practices, only settling after ordering the company to respect the privacy wishes of its users, subjecting it to regular privacy audits for 20 years.

That’s heavy stuff for a company some of you trust your most private data to.  But the smart ones don’t and they have finally been heard from in a recent AP-CNBC poll revealing that 57 percent of Facebook users never click on ads or other sponsored content.  The obvious reason, they are concerned it will be used in a way that breaches their privacy.  Another 26 percent hardly ever do this and only 4 percent indicate they often click on ads.

This could be the primary reason that General Motors, the third-largest advertiser in the , will drop Facebook from all its advertising.  Apparently it didn’t sell cars.  Considering the Facebook public stock offering coming this month, it exposes the riskiness of the overall Facebook model, according to Brian Wieser of Pivotal Research on MSN/Money.  And it’s not just Facebook; another large consumer products company thinks it may not be worth the money spent.

I did a blog recently, “What U.S. company do you hate the most?”  Guess who came out number 1.  That’s right.  Facebook.  Here’s a quote from the entry: “Facebook has the lowest customer satisfaction score from the American Customer Satisfaction Index.“  Further, “The company’s customer service was described as poor by 25.9 percent of users in 2011.”  In most industries that would spell disaster but fortunately for Zuckerberg, he holds the edge.

He’s giving away a communications vehicle that is absolutely free.  All he asks is that you give him all your private information to use in any way he chooses.  And there lies the problem of this whole mess.  It translates into yet another distrust by users where 54 percent said they would not feel comfortable using Facebook for financial transaction in purchasing goods or services.  Just imagine what that kind of thinking would do to a site like Amazon.com.


Analysts say this kind of e-commerce is necessary if the company is to survive.  But only 8 percent said they would feel safe in buying through Facebook.  These are all figures that, if they aren’t changed and changed quickly, could provide such a negative picture of this social media that it begins to lose both users and more advertisers. I have followed Mark Zuckerberg on his privacy raids since they first started and he appears completely clueless on the merits of the issue. 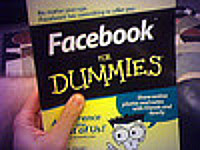 This has all had its effects on the current stock offering with an evaluation of around $100 billion, with half in the poll saying that is overvalued.  That number jumps to 62 percent with active investors.  There is also no consensus whether Facebook would make a good investment which does not bode well for the long term.  And Zuckerberg garners only 18 percent in those who have confidence in him as a leader of the company.  Has he just been lucky so far?

For as long as I can remember, users have been suspicious of Facebook’s use of their personal data.  In the AP_CNBC poll, which was conducted May 3 through May 7, 59 percent of respondents said they had “little or no trust in Facebook to keep their information private.”  Yet the company has grown to 901 million monthly users worldwide.  The answer is really simple, just give the very minimum of information to identify yourself and never your birth date.

Finally, an online survey the pollsters asked readers to respond to asked the following question: Do you trust Facebook to keep your personal information safe?  The results: