A lot of articles have been written about this new report by the , many simply documenting the number of deaths on each side with the conclusion that in ten states, more people have died from firearms than in motor vehicles.  It is the kind of study that the National Rifle Assn. (NRA) and its members cannot argue with, considering the recent increase in obstacle driving causing auto accidents, like texting, while you are on the road.

There is also a good analysis of the report on the New Trajectory site that goes into detail on the study findings with quotes that point out just how much new gun control regulations are needed.  The report accentuates that while auto deaths are on the decline due to years of education and injury prevention strategy, “firearm deaths continue unabated.”  In my view, entirely the result of NRA pressure on conservative state lawmakers caving to the sheer force. 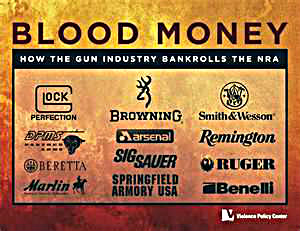 I thought I would concentrate on just one state in the study to point out just how loose gun laws have led to more gun deaths.  The state is …where I live.  Yes, we have the loosest gun laws in the country and it is the result of a bunch of gun loving fanatics backed by a state legislature and Governor that bow to this group in order to be re-elected.  It is still the Wild West here and many residents are proud of it.  Others, progressives like me, look at these people with pity.

An interesting video on how gun ownership is diminishing:

Kristen Rand, ’s legislative director, comments that firearms are the only consumer product not regulated by the federal government for health and safety.  Thanks to the NRA and its head thug Wayne LaPierre.  Americans are experiencing new safety regulations that protect them in their cars and from others on the road.  But not so with guns.

Rand thought gun deaths exceeding motor vehicle deaths was “stunning,” considering that 90 percent of households own cars when only one-third own firearms.  More than stunning, it is tragic.

Charles Heller of Arizona Citizens Defense League, a gun rights group, has his own figures.  To show you the inaccuracy of the NRA led, gun worshipping gang, Heller says there were 50,000 who died in crashes compared to 32,000 from guns, the latter close.  The VPC reports from their study that there were 31,236 firearms deaths in 2009, 36,361 motor vehicle deaths.  In there were 12.98 gun deaths per 100,000 residents versus 12.27 motor vehicle deaths.

is hell-bent on allowing its gun toters to carry their weapons anywhere anytime.  They can already carry them into bars but were recently denied taking them on college campuses and in public buildings.  The state legislature has threatened to introduce both bills again.  State Sen. Ron Gould is running for the U.S. Congress and is firmly behind both pieces of legislation.  It is obvious that Gould is courting the gun-totin Tea Party that has a firm hold on politics.

TucsonSentinel.com quotes VPC on tightened gun regulations and education: “Comprehensive regulation of the firearms industry and its products could include: minimum safety standards (i.e., specific design standards and the requirement of safety devices); bans on certain types of firearms such as “junk guns” and military-style assault weapons…”  Now this would sound reasonable to most thinking individuals but not to dimwit gun nuts.

’s own Charles Heller, who rejected calls for weapons design changes, said: "You want them to be dangerous or they're no damn good. Making them safer adds complexity, and that has unintended consequences.  The only true safety in firearms is the person using it."

And therein lays the problem.  Too many of those “persons” walking around the streets of and other states throughout the country with a weapon they hardly know how to use.
at May 29, 2012