Obama must go to the trenches to win in November 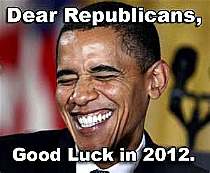 During the middle of April, a CNN poll of registered voters showed the President leading Mitt Romney by nine points if the vote was held then.  Today, a Washington Post-ABC News poll reports that they are tied at 47 percent.  The latter does show that overall, 49 percent are actually in Obama’s corner with 46 percent for Romney.  The CNN poll was conducted just 2 days after Hilary Rosen said that Ann Romney hadn’t worked a day in her life.

Other polls found that the decision by President Obama to approve gay marriage could hurt him but nowhere is this proving to be a major barrier in voting for him.  Christians say he can have the gay vote and 2010 exit polls say he received 70 percent of it.  The GOP garnered 31 percent.  With 3.5 percent of Americans identifying themselves as gay/lesbian, that is just under 11 million potential voters that must be convinced that they can expect more from a progressive.

The CNN poll says that 55 percent of women are in Obama’s corner compared to 39 percent for Romney.  With an all-out assault against the ladies by the GOP, it’s hard for me to understand how any woman could vote Republican, except maybe Ann Romney.  House Speaker John Boehner continued the rage recently by pushing a House bill that “…seriously weakens the Violence Against Women Act.”  And there’s a lot more where that came from.

Abortion, the constant push to repeal Roe v. Wade.  Arizona Gov. Jan Brewer signed a law recently moving the ban on abortions from 20 weeks to 18.  Many of these laws “…omit reasonable exceptions for a woman’s health or cases of rape, incest or grievous fetal impairment.”  All include criminal penalties and fines that make doctors reluctant to do an abortion.  Republican lawmakers, with the religious right on their backs, think only of re-election, not the pregnant woman.

Access to health care is also threatened as evidenced by another stupid move by Jan Brewer to eliminate funding in for Planned Parenthood.  These funds were already blocked from being used for abortions, now this dingbat has cut off care to women for care like cancer screening and family planning.  This is the only place these folks had to go.  Last year the House GOP tried to limit PP funding for birth control, cancer screening and other preventive care.

Equal Pay.  President Obama has been attempting for three years to improve on the “…1963 Equal Pay Act to enhance remedies for victims of gender-based wage discrimination…”  He wants to “…mandate that employers show that wage differences are job-related, not sex-based, and driven by business necessity.”  It is beyond me what possible difference it could make to a man that his female counterpart is making the same as him.  Unless it’s a masculinity thing.

Domestic violence.  The Senate tried to renew the Violence Against Women Act, designed to protect victims of domestic and sexual abuse.  But the House version omitted protections for gay, Indian, student and immigrant abuse victims.  In some cases this will make the abused stay with the abuser, ultimately resulting in more violence.  Of course this isn’t a Republican voting block so why should they care.

Romney is still seen as one who will likely change his position on issues to fit the situation with more feeling that Obama will stand up for what he believes than Romney.  Now if I was looking for someone to depend on doing what they said they would do after the election, it would be hands-down-Obama.  The president will hopefully have a more favorably stacked Congress after November so he won’t have constant GOP opposition to everything he presents.

The economy is the thing.  80 percent of Americans still think it’s bad but 54 percent feel positive about the future and 58 percent think their financial prospects will improve.  Obama has promoted tax breaks for small business, wants to end oil and gas subsidies and wants to allow the millionaire tax breaks to expire.  Romney is against the latter two, has recently touted the 100,000 jobs Bain Capital, his former company, created.  And of course, cut, cut, cut taxes.

The President has an edge on Independent voters with a differential somewhat favorable in age/income, but these numbers are hard to confirm and maintain.  My guess is still that the Hispanics will get their act together and it will be this vote that helps re-elect Barack Obama, and give the Dems. additional seats in the House and Senate in states where they have the numbers.  The question is what kind of campaign will Romney run.  On the issues or Karl Rovish???
at May 25, 2012