When does self-defense become murder? 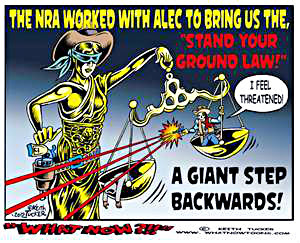 The “Stand Your Ground” law has taken flak since Trayvon Martin was shot and killed by George Zimmerman in where the legislation was enacted for the first time under the complete supervision of the National Rifle Assn. (NRA) in 2005.  Zimmerman has been charged with second-degree murder and there is some concern over Zimmerman’s pursuit of Martin in the incident, which the bill’s sponsors say was not intended as an option.

It’s like playing Wyatt Earp or vigilante, and we all know that isn’t allowed anywhere but in .  Precisely where SYG was re-enacted recently; that state passed the law in 2006 after only 20 seconds of justification by the NRA before legislators.  A total of 33 states have passed a similar version that allows the expansion of deadly force in protecting yourself outside the home.  Some question whether the 2nd Amendment intended this.

just couldn’t wait to test the law and one of the state’s gun worshippers decided to do just that on April 3, at a Taco Bell in Laveen.  He shot Daniel Adkins, Jr. in what he claimed was self-defense.  The young man was 29 but with the mental capacity of a 13-year-old.  The shooter was not charged.  Adkins was walking past a Taco Bell just as the 22-year-old shooter was picking up his order.  The latter slammed on his brakes barely missing Adkins.

The two men exchanged words and according to the shooter Adkins swung his hands in the air in the direction of the SUV.  The question at this point is whether the shooter almost hit Adkins with his SUV; if so, who was the instigator of this altercation?  Or is that not considered under the SYG law?  Adkins wasn’t even close enough to touch the vehicle but when he waved his hands in the air again, the driver shot him with his S&W 40-caliber weapon, hitting him in the chest.

Adkins was not armed but the shooter “believed” he was carrying due to what he thought he saw was a metal pipe or bat in the victim’s hand.  Since the shooter’s fiancé was also in the car with him, it will be interesting to hear her take on the event.  CNN spoke to the shooter’s father who, behind the door of his home warned the reporter that he had a gun in his hand.  He did defend his son’s use of deadly force.  He also said witnesses said that Adkins “went berserk.”

Adkins family later said that all Daniel had in his hand, what the shooter thought was a weapon, was the leash of his loyal dog, a yellow lab named Lady.

In this retaliation Adkins is purported to say: “What the hell, you almost hit me,” and “watch where the f*** you’re going.”  Sounds like substantiation of the fact that the driver almost did hit him, and his following tirade does not appear to justify the taking of the man’s life.  It sounds more like wild-west justice based solely on the fact that the NRA has apparently driven home the ideology to its members and the public that it is OK to shoot first and ask questions later.


The senior Atkins told CNN, "Why didn't he shoot my son in the leg? It would've stopped him. He hit him right straight in the heart. He shot to kill."  Laurie Levenson, a professor at in , said:
"When you arm people on the streets, the opportunities for tragic shootings like the one in the Martin case increase."  A 2007 Nat’l Dist. Attorney’s study also found that law enforcement is concerned over the “Stand Your Ground” laws.