Have you considered suicide? If so, you were probably drunk, possibly armed 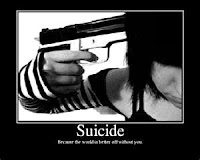 Unfortunately the statistics don’t lie and they tell us that the person is likely to be drinking and may use a firearm to take his or her life.  Guns and booze obviously don’t mix so why is the National Rifle Assn. (NRA) lobbying so hard for its members to be allowed to carry guns into bars across the country?  Just one more of those ideas that common sense tells you is stupid but Wayne LaPierre, head of the NRA, apparently suffers that distinguishing characteristic.

From 2003 to 2009, around 20 percent of citizens committing suicide had blood levels that satisfied the standard definition of intoxication, according to family Practice News.  Shocking?  Not really when you consider 72 percent of those age 35-54 drink; same for 18-34; 59 percent for 55+, and the fact that there are 270 million guns in the hands of civilians.  That’s 88.8 firearms per 100 people, close to one per person.

The is number 41 in the world in the number of suicides with 11.8 per year per 100,000 population.  In a 2011 study of suicides by city, Business Insider listed the top 15 with as number one.  Interestingly, with the loosest gun laws in the country was the only state to have three cities listed: , and .  According to the American foundation for suicide Prevention, someone commits suicide in the every 14.2 minutes.


Mitchell Zoler of Family Practice breaks it down by gender with 24 percent among men and 17 percent for women.  But the possibility increases among young adults where suicide is more impulsive.  As Zoler puts it, Alcohol serves as the “disinhibitor.”  And alcohol is also the number one instigator for abuse because it is so readily available.  Drinking reduces inhibition and increases aggression which is present in both domestic abuse and suicide.

Here are some more startling statistics from the American Foundation of Suicide Prevention and Suicide Awareness Voices of Education:

These are raw, startling facts re. how suicides occur in the and some of the avenues taken to achieve the act.  What is really alarming is the fact that over half of suicides are accomplished using a firearm.  What is equally alarming is how many guns are available in this country (270,000,000) that gives the person the means to do harm to themselves.  At some point the gun public must realize just how much the 2nd Amendment infringes on the right to live of non-owners.
at May 02, 2012