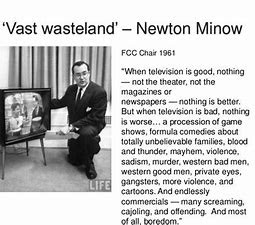 The tvtech site reports, "On May 9, 1961, then newly appointed FCC Chairman Newton Minow called television a 'vast wasteland,' criticizing the medium for its violence, inanity and impact on children." I was working in television in those days and considered it an extremely creative and glamorous business. I still do, except for at least two exceptions, Fox News and Tucker Carlson. Is it possible that Minow could see in the future with the latter in mind when making that statement?

Why do I bring this up? Because of the absurdities Carlson claims on his show; plus the fact, this moron actually admits he lies when cornered. In late January...

Tucker Carlson claimed that the political violence the United States has been suffering is coming from the left, not the right — insisting that the right, unlike the left, has remained “peaceful.”

This is beyond unbelievable since we recently went through four years of the ex-White House maniac, Donald Trump, in his quest to stir up violence almost on a    daily basis. The Jan. 6, 2021, insurrection on the U.S, Capitol is an excellent example of GOP led violence. Carlson, of course, is a lunatic, but it is his statements and and a trove if misinformation that is so indicative of Minow's "wasteland."

It has been 60 years since Newton Minow's "Vast Wasteland" remark, and I do think television has made some very positive strides. As an example, in my day, TV news and weather was something offered by local stations as sort of a public service, much of it unsponsored. Today, news departments have huge budgets and most strive to provide comprehensive, in-depth news. Admittedly, there are some that slant the news, and, of course, those who completely misrepresent it.

MUST SEE: Still a ‘Vast Wasteland’? Newton Minow on the State of TV...

I have heard the opinion, 'Really...nobody could be that stupid,' referring to Tucker Carlson. Well, he certainly looks the part, but if any of you readers have any insight into this please email me. I have given considerable attention to Fox News in this blog over time because the network stands for everything class journalism isn't, and they are so easy to make fun of and criticize with the largest number of buffoons to ever hit the American airwaves.

The AlterNet's Alex Henderson leads us through a number of radical right wing violence incidents that have happened in recent years completely ignored by Carlson...

"from the January 6, 2021 insurrection to an alleged plot to kidnap and possibly murder Michigan Gov. Gretchen Whitmer to White nationalist terrorist massacres in El Paso and Pittsburgh in 2019. Pro-Trump groups like QAnon and the Proud Boys openly advocate violence, and the leader of the far-right Oath Keepers, Stewart Rhodes, is facing seditious conspiracy charges for his alleged role in the Capitol insurrection."

Back to Newton Minow's observations testifying to Congress...

“When television is good, nothing—not the theater, not the magazines or newspapers—nothing is better,” he told Congress. “But when television is bad, nothing is worse. I invite each of you to sit down in front of your television set when your station goes on the air and stay there, for a day, without a book, without a magazine, without a newspaper, without a profit and loss sheet or a rating book to distract you. Keep your eyes glued to that set until the station signs off. I can assure you that what you will observe is a vast wasteland.” 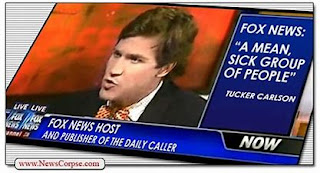 of statesmen as compared to today's gang of inept politicians whose only goals are to amass power, line their pockets and get reelected, no matter what it takes. Minow recently updated his views of television while adding social media and “fake news.” Here's what he said...

“I think the issues for the next generation are the government’s role in social media,” Minow said, adding that he was proud of the strides television has made in educational TV but that local stations needed to remain diligent in ensuring unbiased coverage to their viewers. He also supports reinstating the FCC’s “Fairness Doctrine,” which was repealed in the 1980’s.

"Unbiased coverage," two words neither Fox News nor Tucker Carlson are familiar with.