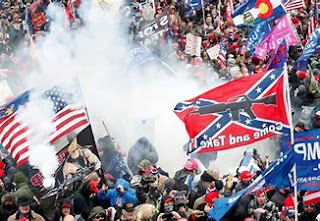 The Washington Post's Jennifer Rubin explores this concept in an opinion column that should rattle the cages of all Democrats, Independents and Republicans. The title of her piece is, "Republicans are trying to turn red America into a dystopia," and is, as all honest journalism is today, frightening in its prediction of the destruction of American democracy. I must say, for a conservative, Rubin takes the GOP to task with unusual insight and objectivity.

She wades right into Florida with one of the state's most dictatorial moves yet in a bill, fully supported by the demented Gov. Ron DeSantis, explained by Robert P. Jones, head of the Public Religion Research Institute ...

The most pernicious part of the bill is its bizarre definition of “individual freedom,” consisting of eight principles plainly written to protect white people. The final one is the most sweeping: “An individual should not be made to feel discomfort, guilt, anguish, or any other form of psychological distress on account of his or her race.” The bill then proceeds to define “discrimination” under Florida state law as a violation of “individual freedom.”

This provision effectively gives any single white person veto power over the content of history curriculum in schools or trainings in the workplace. White discomfort governs historical truth.

DeSantis has commented he wants to put the people in power, which the above 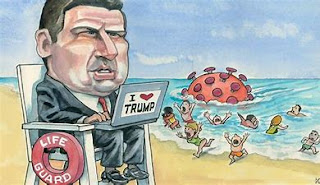 certainly does, but it is still this maniac who calls all the shots. I wonder about those poor souls in Florida who are Democrats, or lean to the left, and disagree with DeSantis. The breakdown is 5,080,697 registered Democrats, 5,123,799 registered Republicans and 4,083,215 voters without a party affiliation or registered to one of the more than two dozen “minor” parties in Florida.

"Keep in mind that Florida Republicans have no problem making gay children uncomfortable. They have also introduced legislation that would hobble education about gender identity and sexual orientation. The Tampa Bay Times reports, “Critics, who call the measures Florida’s ‘don’t say gay’ bills, argue the measures are an attempt to weaponize the idea of parental rights to marginalize LGBTQ people.”

And here's the rub, "The legislation would encourage parents to sue if they find school curriculum, even at the high school level, is not age appropriate or developmentally appropriate." The LGBTQ rights group Equality Florida's Nadine Smith, is in opposition to the bill, reports the Tampa Bay Times. The TBT says further, we're dealing with a "Non-existent problem...

"There is no developmentally inappropriate curriculum about sexual orientation or gender identity being taught to young kids, she contended.”

The Dictator DeSantis in Action...

The South and Southwest are leading the fight in the removal of famous names and books from school curriculums with Texas eliminating Martin Luther King, Jr. and the Ku Klux Klan from teachings. Tennessee recently banned the book, Maus, because it was "inappropriate for 13-year-olds based in part on its inclusion of swear words and drawings of nude figures." I grew in in Tennessee in the 1940s and in either of these cases most of us wouldn't even blush.

Rubin agrees that, as in other cases of misdirected advocacy, the ones who win are the lawyers...

"The bills also encourage frivolous litigation that would make trial lawyers blush. Incentives to harass teachers and tie up schools in endless litigation suggests that Republicans would rather spend time and money fighting these legal battles than on education. It’s a peculiar position for a party that used to look askance at tort litigation."

The Republican Party has no direction, no agenda; their only mission being the destruction of anything proposed by Democrats, and the complete annihilation of democracy. And the tragedy in all this...the American public is supporting it.