The Epitome of Republican Wrongdoing...Using Children for political gain 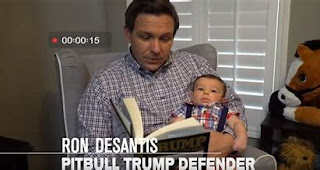 In the movies or on television, if you want ratings you use animals. In today's political competition you can grab the heartstrings, and the attention of voters, by using children. Remember J.D. Vance, "Hillbilly Elegy?" This dufus is in the 2022 Ohio Senate race using this idiot argument, according to Alex Henderson of AlterNet...

"that 'childless Democrats' and 'the childless left' shouldn’t hold public office because they haven’t had the experience of being a parent."

This provokes a huge round of laughter until you realize this idiot is using children to conduct a political campaign that is certain to be fraught with more absurdity and the usual Republican ration of lies. But Wajahat Ali took him down with his liberal piece in The Daily Beast...

"He argues that it is Republicans, in fact, who pose a major threat to the safety and wellbeing of children.

"Far-right Republicans, Ali stresses, are seriously flawed in their thinking when they believe that 'critical race theory' and books they don’t like pose a greater danger in schools than COVID-19."

The GOP is in a race for votes in 2022, and 2024, and are capitalizing on white supremacy, while using the youth of America to make their point. Donald Trump opened the door with his racist comments and actions during the four-years of his administration. The bigots immediately came out of the woodwork with his blessings as well as others around him. The following illustrates this madness...

“Virginia Gov. Glenn Youngkin, who has already banned ‘divisive concepts’ from being taught in schools as part of the right’s disingenuous ‘critical race theory’ panic, is now just one vote away from the Virginia Senate adding an amendment to ban mask mandates in Virginia schools,” Ali observes. “North Carolina Republicans are set to file a bill in the House to ban schools from mask mandates…. Schools, and our children in particular, have become the unfortunate but effective political pawns for a right-wing movement seeking to convert parents’ pandemic frustrations, fears and anxiety into 2022 midterm votes.”

Getting to the parents who vote through their children. Republicans have no qualms about who or what they use to reach their goal of power. Ali chastises Republicans who "believe that 'critical race theory' and books they don’t like pose a greater danger in schools than COVID-19." Here's a tweet from his Twitter site...

"During Black History Month, Republican leaders are more comfortable with our kids getting COVID than reading a book written by a Black author talking about white supremacy and diversity."

It goes without saying that the GOP has done everything it possibly can to expose children to the coronavirus by opposing all the CDC protocols for protection. Over 12.3 million children have tested positive for COVID-19 since the onset of the pandemic out of a total 80,068,996 cases in the U.S. One can only wonder how many of these kids could have been saved the agony of the virus had Republican states like Florida and Texas observed the rules of science.

And, of course, these millions of childrens' cases had to lead to some deaths as reported by Newsweek...

So, not only has the Republican Party been instrumental in the deaths of over 1,000

children from a virus where, with the correct precautions, no doubt, a large number could have been saved, they also want to use them now in the upcoming elections to sell an agenda of lies and corruption.

The old saying comes to mind...'Do you have no honor?' I guess not when it comes to Republicans.